This is one of the best fairy tail for kids online. Once upon a time, there lived five peas in a pea pod. They were all different, but still living together, as the pea pod was still closed. They were too small to bear with the Sun. So, they used to sleep all day.

But at night, they used to talk to each other and listen to the music around them, especially the music of the Moon. The Moon when crescent, used to tie some silver strings to its ends. It used to play the harp and sing some beautiful songs for the peas. Also, read The Candy Fairy. 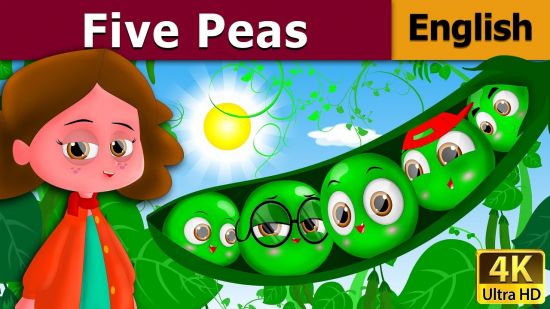 At the times of full Moon, it used to play drums. The peas would wake up listening to the loud drums played by the moon. But every pea has its own reaction to the Moon’s music. “I love this sound of drums. Boom, boom, boom!” said the first pea. “I love its castanets. It’s soothing!” said the second pea. “I like the way it plays the harp. It’s very beautiful,” said the third pea.

“Oh, why can’t there be some quiet time? Forget the music. I love to sleep as much as I can!” said the fourth pea. The fourth pea was very lazy. It loved to sleep all the time. The fifth and the youngest pea was very different from the other four. “I love all kinds of music. The castanets, the drums, and the harp are special and makes me happy when I listen to them,” said the fifth pea. Also, read The Magic Porridge Pot Story.

The peas were growing day by day. They didn’t realize it until they were fully grown. Now, they felt that their pod had become congested. “Please move aside! I’ve no space to move,” said the first pea. “Even I don’t have any! It’s stuffy here!” said the second pea. “The pod had become too cramped to stay,” cried the third pea. “I’m unable to sleep here! Please, make some space for me!” said the fourth pea. “I’m the smallest but still finding it difficult to move,” said the fifth pea. All of them were complaining and asking each other to move aside.

Suddenly, the pea pod cracked open and a harsh light came in. All of them became very uncomfortable and wanted to stay inside the pea pod. Nobody wanted to come outside except the youngest one. He was very happy and excited to see the outside world. Later, when they all got comfortable with the Sunlight, they started a discussion. They discussed for a while and finally decided to go out of the pea pod. They took this as an adventure and decided to go for it. Also, read The Enchantress and The Apple Tree.

One by one, the slid down from the pod. They landed on a furrow in a pea patch. They were very happy as they were exploring the world for the first time. “Wow! It’s so beautiful here,” said the first pea. “I’m happy to be there,” said the second pea. “It was a wise decision to leave the pod,” said the third pea. “I want to sleep. Find a good place for me,” said the fourth pea. “Hey, look! We were living too high on a branch too high from the ground,” said the fifth pea.

As they were discussing the new world they were seeing, a boy passing by saw them. “These peas seem to be perfect for my slingshot,” said the boy. The boy picked them up all of them one by one. The first pea flew far away in the sky, while the other peas couldn’t even see. Then the boy flew away the second, third, and fourth with his slingshot. Then flew the youngest pea! All of them were scared while the youngest pea was very happy and he was feeling like a butterfly flying through the clouds. Also, read The Water Drop Boy.

The youngest pea landed on a windowsill. “Thankfully, I’ve landed safely!” he said. As he gazed through the window, he saw a little girl lying on the bed. She was unwell and coughing continuously. Her mother was asking her to eat. The pea saw that the mother was trying to feed the little girl but the girl was too ill to eat. The mother seemed very worried about the girl.

At night, when the girl fell asleep, her mother prayed for her. “Please help my child to recover from this illness. I can’t see her suffering anymore. Bless her with good health, please! I beg you for my daughter’s life.” The pea too felt sad for the mother and her daughter.

“I can sing too. I was singing a song for you with the Moon’s drums. The Moon plays the drum when he’s full,” the pea said. “But I can’t hear it. You must be a special pea!” she said. “Everybody in this world is special and everything has some music within. We just have to concentrate and listen to it,” replied the pea. “You mean to say I can listen to the Moon’s drums. It this possible?” asked the girl. “Everything is possible in this world,” told the pea.

After some time, the girl could finally listen to the Moon’s drums. She was very happy but her happiness didn’t last for long.

She was sad about her condition. The girl used to think that it was incurable. On hearing this, the pea said, “What if I become something other than a pea? Then you can also be better again!” “But you are only a pea! What else can you become?” asked the girl. “Of course, I can! Believe in yourself and you can achieve anything! If I become something else, would you believe that you’ll get cured?” asked the pea. “Okay, I will,” she smiled and went back to her bed.

The next morning when the girl woke up, she remembered the conversation with the pea. She looked for the pea in the window but he wasn’t there. “Oh! Maybe it was just a dream! How can a pea speak!” She went to the window and looked the fresh, sunny morning out there. “As the pea said can’t I believe I’ll be cured? I think I’ll get better,” she said.

The youngest pea was trying hard to keep his word. He stayed outside the window and got himself wrapped in the dust for a few days. Later, when the winter arrived, the dust helped him to survive through the snow. Every day, he was pushing himself towards his goal. “If I bear through these circumstances for few more days, I think I can achieve my goal. I’ll try harder to keep my promise.” The youngest pea survived through the winter with his strong willpower.

The season changed and the small pea got sprouted.He transformed into a plant with some branches and a couple of beautiful flowers.

One day, the girl’s mother noticed the beautiful sprouted pea plant outside the window. When the girl saw his friend transforming into a plant, she said to her mother, “If a pea can change his life, why not me? Now I believe I can be cured.” The girl smiled at the pea sprout. The mother took care of the pea sprout and took care of it.

Here is a short visual depiction of the “Five Peas Fairy Tail”. See the video story below,