This is one of the amazing short animal stories for kids. Once upon a time, many animals lived harmoniously in a forest. Everyone was happy and they all got with each other. Then one day, it started to rain heavily. Many hours passed by, but the rain did not stop. 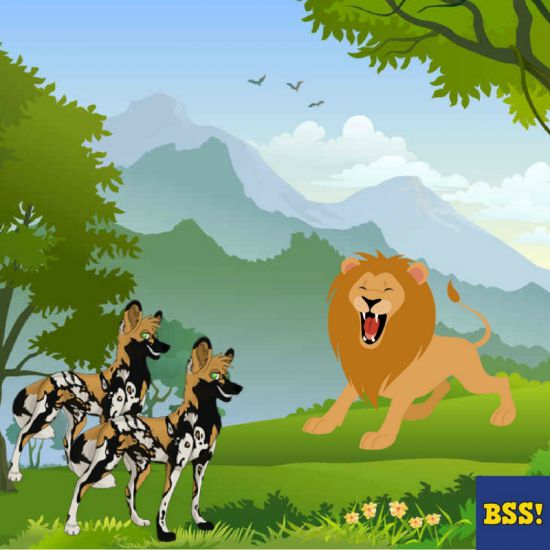 The animals became scared, many were taken along with the currents of the water. “Help! Help!” the animals cried. Everywhere there were animals who needed help. In the same forest, a pack of five wild dogs lived as well. “Let’s help these animals,” the decide. And so, all five of them pulled out the animals, hence saving them from drowning. All the animals were safely pulled out of the waters.

“Thank you,” the animals said to the wild dogs, “all of you saved us.” Soon, the heavy rain stopped, and the water went down. All the animals returned to their homes and began restoring things. Lion, the king of the jungle came to know of the heroic five wild dogs who helped all the animals. “Call those dogs here, I want to thank them personally,” the king ordered the dogs to be brought to his den.

“I hear, you helped the animals and saved them from drowning,” the lion says to them. “I am happy as well as proud to have such brave dogs as you all here in my forest. All these animals would have drowned if you all had not saved them. As a reward for your bravery and the heroic act, all of you five will eat with me, in this den of mine for a week.” Then, to the animals, he ordered, “You all must be grateful to these five dogs who saved your lives. Treat them well and treat them with respect.” You may also like to read, The Lion And The Mouse.

Suddenly a rabbit comes forward and asks, “Your majesty! May I say something?” All the animals turn around to look at the tiny rabbit. “Of course, little rabbit speak, speak!” the lion king roars happily. So, the rabbit speaks, and as he speaks he unfolds a truth. “These five dogs that your majesty so praises, are no heroes. As it happened, I overheard them while I was trying to save my life during the flood. I heard them say that they saved all those animals only so that they could eat them later!”

“What? Is it the true little rabbit?” the king asked, now angry. The rabbit nodded in reply. Angry with the five wild dogs, the king banishes them from his forest. “Don’t ever show your faces here again!” he roared as he chased the dogs away. Also, read Lion And Rabbit Story.