This is one of the best short story about animals with moral lesson for kids. Once a lion, the king of the forest was wounded in a fight with an elephant. The wounded king could not hunt for many days and had to remain hungry. The lion’s minister was a cunning fox. Since the lion was unable to hunt, the fox too had to remain hungry.

One day, the fox said, “Your majesty! We both are hungry and you are still unable to hunt. If it continues like this, then soon we will die!” The lion replied, “Oh, minister! You know that I can’t chase with my wounded legs. Do one thing! Somehow you can manage to bring an animal to me, then I can easily kill the animal and we will both relish upon that.” The fox said, “I will try my best.” 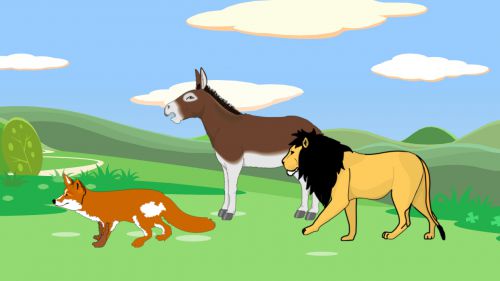 Saying this, the fox went away from there. On his way, he met a fat donkey. The fox’s eyes twinkled. He said, “Hello friend! How are you? I’m seeing you after a long time. You’re looking quite weak!” The donkey replied, “Yes friend, I have become weak because my owner takes a lot of work from me and feeds me little!” The fox said, “I really pity for your condition. Why don’t you come with me to the jungle! Our king is very kind! Our ministerial post is vacant in the king’s court.” The donkey thought he was a domestic animal and he would not be able to survive among the wild animals. The donkey was fooled by the cunning fox and he agreed to accompany the fox.

The fox took him to the lion. When the hungry lion saw the fat donkey coming, he could not control himself and jumped upon the donkey. However, the lion missed the target and the scared donkey ran from there. Due to lion’s haste, they lost a fat prey. It made the fox quite unhappy. The lion was also sad to lose a good meal. The lion requested the fox to try again and bring back the donkey.

The fox went in search of the donkey. The fox met the donkey and said in a surprising tone, “Friend, Why did you run away like this? The lion king was so happy to see you that he couldn’t control himself and jumped up to welcome you.” The donkey was fooled again. He again accompanied the fox to see the lion. This time, the lion was very careful. When the donkey reached quite close to him, the lion caught him in his grip and killed him easily. Both the fox and the lion were very happy.

When the king was about to eat his meal, the fox said, “Your majesty! I know you’re hungry but before eating, you must take a bath.” The king liked the idea as he hadn’t taken a bath for days. The lion proceeded towards the river. When the lion left that place to take a bath, the sly fox quickly ate up the brain of the donkey. When the lion returned and began eating, he first tried out to find out the brain as he was very fond of it. When the brain was not seen, the lion roared and said, “Where is the brain? Did you eat it up?”

When the brain was not seen, the lion roared and said, “Where is the brain? Did you eat it up?” The fox hurriedly replied, “No, Your majesty! How can I dare to do like this? Actually, donkeys are without brains. If he had any brains, he would certainly have not come here for the second time!” The lion considered the point valid and ate his food happily.

MORAL: DON’T BELIEVE THE WORDS OF AN ENEMY UNDER ANY SITUATION.

Here is a short visual depiction of one of the best short story about animals with moral lesson for kids, “The Foolish Donkey“. See the video story below,