This is one of the best short story about friendship for kids. In a forest lived three friends – the turtle, the crow and the little mouse. All day long, the friends would eat, drink and make merry. One day while the friends were sitting near the lake, they saw a deer running for life. Soon he came near the place where they were sitting, and crashed on the mud out of fatigue. The turtle sprinkled some water from the lake onto him.

In a few minutes, the deer regained consciousness and told the friends that he was running for life from a hunter. The crow flew right to the top of a large tree to check where the hunter was. He came down and assured the deer that the hunter had caught some other animal and was heading home. From that day on, the deer joined the group of friends. They lived happily together until one day the deer did not reach the usual place where his friends would meet. 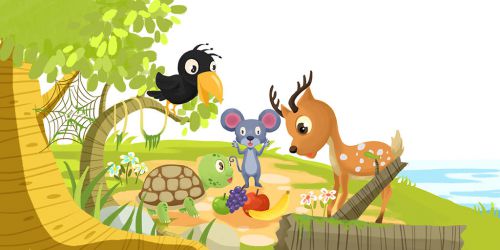 The crow was worried and flew through the forest looking for him. He found the deer caught in a hunter’s net. He flew right back to where his friends were waiting and told the mouse what had happened. The mouse scurried across the forest and found the deer. Slowly and steadily he cut through the net. Just then, the animals saw the turtle walking towards them.

The deer thought to himself, “What lovely friends I have! All of them have come to help me in my time of need.” Just when the deer was thinking about his friends, the crow alerted everyone about the hunter approaching. The mouse quickly scurried into a hole. The crow was perched on top of a tree and the deer got up and sprinted away. Finally, only the poor turtle was left behind.

The hunter picked up the turtle, strung him on his bow and walked away. A few minutes after the hunter had left the spot, the three friends got together and worked out a plan. The hunter was walking along the lake, when he saw a dead deer lying on the path. He put the turtle down, thinking it was his lucky day and walked across to the deer. When he was nearing the deer, the crow cawed and to the hunter’s surprise, the deer got up and sprinted away. The hunter could not believe his eyes. He turned around, and saw that the turtle he had tied to his bow was no longer there.

The mouse had cut the strings while the hunter had gone towards the deer and the turtle had slipped into the waters of the lake. The poor hunter was left crying on the path with no catch, while the friends thanked each other for always being there for each other.

Here is a short visual depiction of this short story about friendship for kids, “The Four Friends“. See the video story below,