This is fox and crane story for kids. In a big forest, there was a big pond. A flock of cranes lived in the pond. All the cranes lived on the fishes in the pond and spent their life happily. In the same forest, there lived a cunning fox named Tricky. Tricky too visited the pond and used to catch fishes. A crane called Whitey every day helped Tricky. Slowly they became friends and started to spend their time chatting, eating, and playing. One day, Tricky invited Whitey for dinner on Sunday so that he could treat Whitey.

Sunday evening, Whitey dressed up and with the grapes left to the Tricky’s house. Tricky welcomed his friend very nicely. Both of them were talking for some time. At the same time, the aroma of the soup filled the place. Whitey couldn’t resist himself. Tricky guessed it and called him inside for dinner. Tricky wished to play with Whitey, so he poured the soup in two plates and placed it on the table. Also, read The Fox And The Crow. 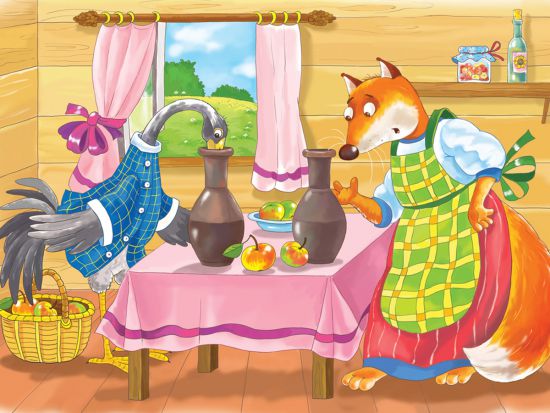 Next day, when Tricky came, Whitey moved with him as usual. Whitey told Tricky that he was delighted by the way he treated him and invited Tricky for the dinner the same evening. In the evening, Tricky arrived at Whitey’s home. Both of them chatted for sometime. Whitey has prepared the soup and the aroma filled the place. Tricky’s mouth watered.

Whitey went in and come with soup in two deep long jars and placed them on the table. Tricky was shocked when he saw the jars. The excited Tricky tried to drink from the jar. The moment he bent down, the jar struck in his mouth. He tried to remove the jar, but he could not do it. He ran here and there and finally the jar broke. Tricky said, “Forgive me my friend! From now, I have learnt a lesson and will not play any tricks and will be a good friend.” You may also like to read, The Frogs And The Crane.

MORAL: ONE SHOULD NOT TRY TO MAKE FUN OF THE OTHER’S LIMITATIONS.

Here is a visual depiction of the, “Fox And Crane Story”. See the video story below,

Tagged with: fox and crane story, stories with morals, the fox and the crane