Fox Without A Tail – Aesop’s Fables

This is one of the many famous Aesop’s Fables for kids. One day a fox was walking out. But suddenly it heard a loud snapping voice and felt a sharp pain on his tail. The fox looked behind him and saw his tail was caught in a trap. He struggled hard to free himself but the tail was badly stuck in the trap. With all the force, it pulled himself and finally it got free.

The fox halt as it looked behind and saw his tail. It was still stuck in the trap. It was just left with a little stump at the back. The fox started crying and was afraid to face every one. At first, he was ashamed of his tail. All of a sudden, it came up with an idea. 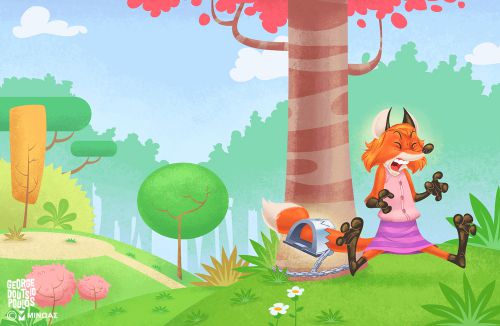 He called all the other foxes for a meeting. When they had assembled, the fox proposed that they should all cut off their tails. He pointed out how inconvenient a tail was when they were being pursued by dogs, how in the way they were when all they wanted to sit down and have a friendly conversation with someone. “I can’t see any good use of a tail,” it said.

One of the foxes said, “That’s all very well. But I don’t think you would have suggested we cut off most beautiful part of our bodies if you had not gone and lost your’s first!” All the other foxes walked off laughing with their big pushy and fluffy tails proudly pointed upwards.

MORAL: IT IS NOT ALWAYS EASY TO FOOL OTHERS.

Here is a short visual depiction of one of the many famous aesop’s fables, “Fox Without A Tail“. See the video story below,