This is the famous frozen fever story for kids. It was early morning in the Kingdom of Arendelle and Queen Elsa was hard at work. It was Anna’s birthday – the first the sisters had spent together since they were children. Elsa had been preparing for days. She wanted it to be Anna’s best birthday ever. Elsa waved her hand and a small ice sculpture appeared on the cake she’d made for Anna. It was pretty but didn’t seem quite right. With a flick of her wrist, she tried again. “Come on, Elsa! This is for Anna. You can do this!” she thought to herself. Behind her, Kristoff smiled reassuringly. “I just want it to be perfect!”

“Speaking of perfect, check this out!” Kristoff pointed at a handmade banner he and Sven had made. It read “HAPPY BIRTHDAY ANNA” in big colorful letters, but the paint was all drippy. Elsa looked at the messy banner. It was time to wake Anna. “Kristoff, are you sure I can leave you in charge here? Because I don’t want anything to happen to this courtyard,” said Elsa. Kristoff confidently said, “Absolutely! What could happen? It’s all set!” You may also like, Frozen Elsa Story.

Just then, they heard munching coming from behind them. It was Olaf. His cheeks were stuffed with frosting from Anna’s birthday cake. “Olaf, what are you doing?” asked Elsa. “I’m not eating cake! It’s an ice-cream cake!” cried Olaf. “It’s for Anna,” Elsa told Olaf. Olaf removed the piece from his mouth and shoved it back into Anna’s cake.

Suddenly, the Kingdom bells began to chime. “Oh, it’s time!” Elsa turned to Kristoff, “Okay, you sure you got this?” “I’m sure,” Kristoff replied. All Kristoff had to do was make sure everything stayed in order until the party started. And that nothing got broken. And Olaf didn’t eat any more cake.

Elsa gave Anna her first birthday present, a beautiful new green-and-teal dress. With a wave of her hand, Elsa used her magic to add icy sparkles to the dress. Then she picked up some flowers from a nearby vase. With a flick of her wrist, she frosted the flowers onto a pretty new green gown for herself. Anna looked over their new dresses. “Fancy!” Anna said. Also read, Snowman Short Story.

Suddenly, Elsa sneezed. Unseen by Anna and Elsa, two tiny snowmen appeared. Elsa’s sneeze had accidently created them. The snowmen dropped on the floor and scampered off. Elsa sniffed and rubbed her nose. Smiling, she handed Anna the end of a string. “Just follow the string!” Elsa said. Anna eagerly went wherever the string led. She followed it through the halls, and over and under furniture.

With each stop on the string, Anna discovered a birthday present! There was a beautiful bracelet, a silly Olaf cuckoo clock and even a painting of the sisters and their friends. Elsa had really thought of everything! The only problem was her sneezing seemed to be getting worse. Elsa sneezed and sneezed. And with each sneeze, more mini snowmen appeared, scurrying off one by one, unnoticed by the sisters.

Out in the courtyard, Kristoff, Sven, and Olaf were keeping an eye on the surprise party. Just then, Olaf heard a noise. The little snowmen created by Elsa’s sneezes barreled into the courtyard and began knocking over the party decorations. Kristoff chased after the snowmen. He couldn’t let them destroy Anna’s party! Olaf, on the other hand, was very excited. He hugged the snowmen close and said, “Little brothers!”

Inside the castle, Anna’s birthday adventure continued. Elsa surprised her sister with more and more presents! Anna was so grateful. But she could tell Elsa wasn’t feeling well. Soon the birthday string let them out of the castle to the Oaken’s Cloakens and Sauna kiosk in the marketplace. Elsa gave Anna the biggest and softest of Oaken’s Cloakens just before sneezing again. Oaken popped out with the sauna. He offered Elsa a cold medicine of his own making. Anna eagerly accepted the medicine and said, “We’ll take it!”

Elsa was starting to feel very dizzy. But there was only one gift left. And it was at the top of Arendelle’s clock tower. The sisters climbed up, up, up. “Elsa, that’s too much! You need to rest,” said Anna. But Elsa insisted. At the very top, she gave Anna two beautiful wooden dolls. They looked just like the sisters- the perfect birthday present!

Suddenly, Elsa’s cold got the better of her, and she swooned. Anna dropped her presents to keep her sister from falling off the tower. “Elsa, look at you! You’ve got a fever. You’re burning up,” said Anna. “I’m sorry, Anna. I just wanted to give you one perfect birthday!” cried Elsa.

Meanwhile, things in the courtyard were not going well. The mini snowmen had destroyed the decorations. They had pulled down Kristoff’s banner. And now, they were preparing to launch themselves at the cake. “No! No!” Kristoff blocked the snowmen. Olaf grabbed the banner and rearranged the letters. But he didn’t know how to spell. Kristoff tried to read the banner. It read, “DRY BANANA HIPPY HAT!” It was a disaster! 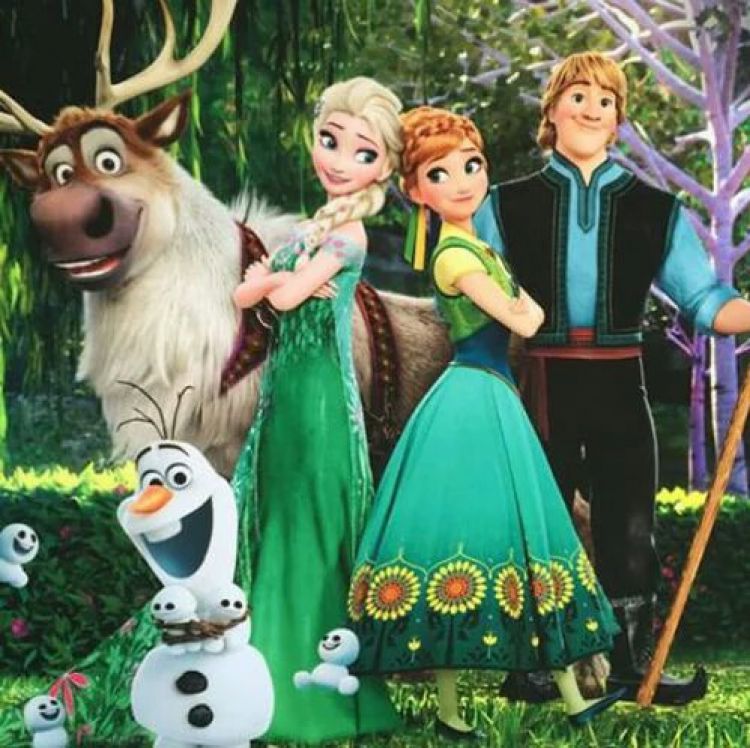 Anna carefully led Elsa back to the castle. As she pushed open the doors to the courtyard, Elsa saw Kristoff, Sven, and Olaf tossing the cake back and forth, trying to keep it away from the little snowmen. Kristoff jumped up onto Sven, and Olaf ran by with the birthday banner. Anna was focused on Elsa and didn’t see anything. But Elsa was horrified. The courtyard was in chaos!

Anna looked up just as Kristoff caught the cake and the birthday banner settled into place. Her face lit up. She had never had a surprise birthday party before. And to her, everything looked perfect! But where had all the little snowmen come from? “Wow!” Anna exclaimed.

Kristoff hopped off Sven and walked up to Anna, birthday cake in hand, “Happy birthday!” Kristoff was so happy to see Anna that he blurted out that he loved her. Foa a minute, he looked embarrassed, then he shrugged, “I do!” Anna couldn’t believe it. It was all so wonderful! But she was still worried about Elsa. Elsa promised she was well enough for at least one piece of cake. So, Sven cut slices for everyone. The party was perfect but Anna insisted it was time for Elsa to get some rest. “Okay, to bed with you!”

So, Sven cut slices for everyone. The party was perfect but Anna insisted it was time for Elsa to get some rest. Anna commanded, “Okay, to bed with you!” “No, wait, wait! All that’s left to do is for the Queen to blow the birthday bugle horn,” said Elsa. Elsa grabbed the horn and accidently sneezed into it. A giant snowball flew out of the end. It sailed across the Kingdom! 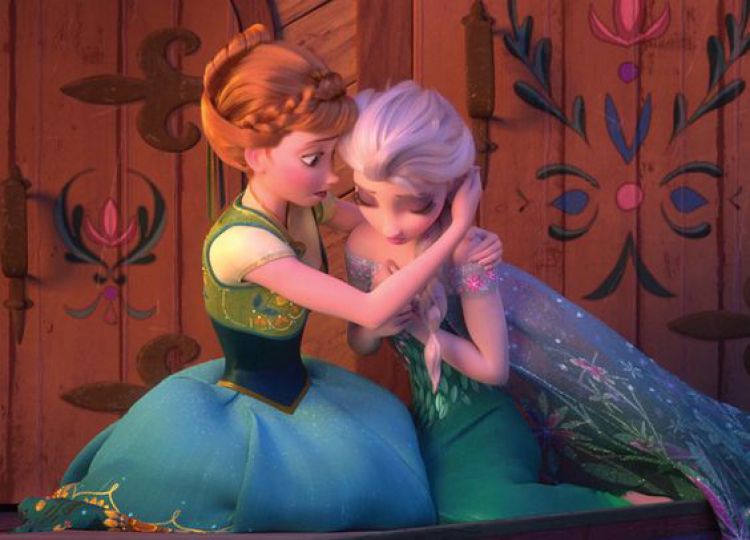 Upstairs, Anna tucked a very tired Elsa into bed. She made her some hot soup, sat down next to her and smiled. “Best birthday present ever!” cried Anna. Elsa was confused and asked, “Which one?” “You letting me take care of you,” said Anna with a big smile.

Anna’s party was over, but Kristoff and Olaf still had one thing to do. Up in the mountains, they knocked on the doors to the ice palace. The doors swung open. Marshmallow was inside. Olaf pushed past Marshmallow. “This way, Sludge and Slush and Slide and Ansel and Flake and Fridge and Flurry and Powder and Crystal and Squall and Pack and Sphere and William.” Behind Olaf came a trail of little snowgies. Kristoff sighed and looked at Marshmallow, “Don’t ask!” Also read, Snow Queen Story.

Here is a visual depiction of, “Frozen Fever”. See the video story below,