This is one of the free bedtime stories for children. “Now that I’m done with school, I think I’ll go traveling,” Liam told his mother. She sighed, “You know we don’t have enough money for traveling!” “I wasn’t talking about both of us traveling,” he explained. “I’m ready for an adventure of my own!” “I don’t think that’s a good idea,” his mother said. 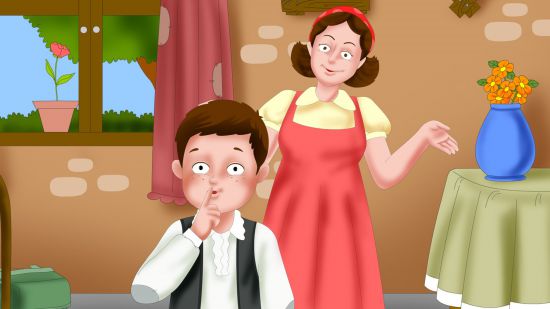 Image Source@ www.youtube.com. Liam headed for the beach. There, he saw a group of fishermen on a boat. “God be with you,” he shouted out to them. “Not much, Not much. Not much.” The fishermen pulled up their net and there were barely any fish in it. One angry fisherman jumped out of the boat and swam to shore. “I didn’t wish for you to catch so few fish,” Liam said. “It’s just a saying! What should I say?” “Catch a lot. Catch a lot,” the fisherman said and let him go.

Liam headed towards town. Along the way, he spotted a funeral procession. “God be with you,” he said as he passed the dead man in the casket. “Catch a lot. Catch a lot.” Suddenly, the grieving widow jumped on him and pulled his hair. “Why do you say ‘Catch a lot’? Isn’t it enough that my husband caught a virus that killed him.” “I’m sorry!” Liam stammered. “I didn’t mean any disrespect. What should I say?” The widow let go off his hair and said, “You should say, ‘May god comfort the poor soul.'” She started weeping and buried her face in her hands. Not wanting to upset her any further, Liam headed out of town.

As he was walking on a country road, he passed a man who was skinning a dead horse in a ditch. “May god comfort the poor soul,” he said. The man jumped out of the ditch, waving his skinning book in Liam’s face. “What are you saying, you disgusting boy? You think the worth of the horse is better than my worth?” Also, read Where The Wild Things Are Story.

“I didn’t say that,” Liam explained. “I didn’t mean anything by that! What should I say?” The man shook his head and said, “You ignorant boy, you should say, Lie in the ditch, you carcass!” Liam repeated, “Lie in the ditch, you carcass!” “Much better,” the man said. The man returned to his job skinning the horse and Liam continued walking down the road.

Along the way, he saw a horse and carriage filled with people. “God be with you,” he yelled above the sound of the large wheels rolling along the bumpy road. “Lie in the ditch, you carcass!” This spooked the horse which bolted towards the left, landing the carriage on its side in the ditch. Immediately, the driver jumped up and dashed towards Liam, snapping his whip. He beat the boy until he could barely walk.

Liam turned around and limped the rest of the way home. His mother bandaged his wounds and helped him to bed. She never said, “I told you so,” but she didn’t need to. Liam learned that mother often know best, and he never went traveling again.

But he learned another lesson as well. He learned to think before he spoke. Every situation is different, so it’s important to say what you think is right and not rely on what others tell you to say. If Liam had done that, it would have saved him a whole lot of trouble. You may also like to read, The Giant Who Shrank.

Here is a short visual depiction of one of the free bedtime stories “Going A Traveling“. See the video story below,