Gold Coins And A Selfish Man

This is one of the best acts of kindness stories for children. Once upon a time, there lived a greedy and selfish man named David. He always wished to have loads and loads of money and never hesitated to cheat on others to make money. David never desired to share anything with any of his family and friends. He used to pay very low wages to his workers.

One day, a small bag full of gold coins was missing. The bag contained 50 gold coins in it. David became restless and became very worried. He searched inside and out for the bag, but all in vain. David’s friends and neighbors decided to help him. However, they could not find it. You may also like to read, The Golden Goose Story. 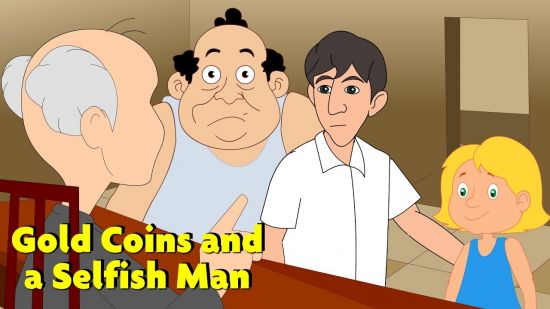 After a few days, a ten-year-old daughter named  Tina found the bag. Tina was the daughter of one of the workers of David. As she saw the bag, she immediately ran to his father and told him about the same. Her father at once identified the missing bag. He decided to give it back to the rightful owner. So, he went to his master.

He delivered the bag back to David and asked him to check whether the bag had 50 gold coins. David was overjoyed to get the coins bag back. Because of his greedy nature, he decided to play a trick with his poor worker.

He screamed at his worker, “There were 75 gold coins in this bag. But you gave me only 50! Where are the other coins? You have stolen them! You are a thief.” The worker was shocked to hear this. The poor man pleaded for his innocence. The worker told the whole story in his defense. But, David did not accept his story and decided to take the matter to the court. You may also like to read, The Golden Swan Story.

The judge was known for his intelligence. He patiently heard both the sides. He questioned the daughter and the worker about the number of coins they had found in the bag, and they assured it was only 50. The judge then cross-questioned David. To that, David answered, “Yes my lord, I had 75 gold coins in my bag but they have refunded me only 50. Therefore, it is quite clear that they have stolen 25 coins!”

The judge then examined, “Are you sure the missing bag had 75 coins?” To this, David nodded firmly. The clever judge knew that David was lying. Everyone in that place knew about David and his nature. Soon, the judge made his judgment.

“Since David lost a bag that had 75 gold coins and the bag found by Tina had just 50 coins, it is obvious that the bag that was found does not belong to David. It was lost by someone else. If anyone finds a bag of 75 gold coins, I will declare that it belongs to David. As there are no complaints about the loss of 50 coins, I order the girl and his father to take those 50 coins as a token of appreciation for their honesty!” Also, read King Midas And His Golden Touch.

MORAL OF THE STORY: HONESTY WILL ALWAYS BE REWARDED WHILE THE GREED IS MEANT TO BE PUNISHED.

Here is a short visual depiction of one of the acts of kindness stories “Gold Coins And A Selfish Man”. See the video story below,