This is one of the best Arabian Nights stories for kids. Once upon a  time in Baghdad, there lived a wealthy merchant called Farid. He had enough money to spend his all life wrapped in lavishness.

But suddenly, Farid lost all his money and became poor. He was forced to work in the fields and lead a harsh life. Poor Farid was not even used to this kind of life. Also, read Aladdin And The Magic Lamp. 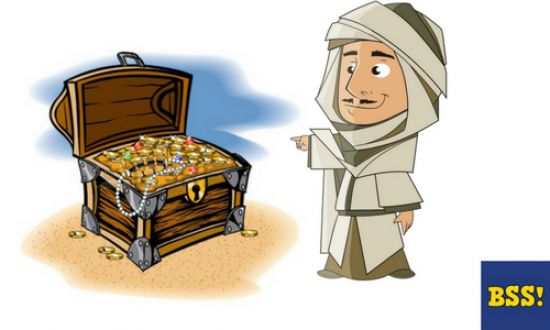 Then, one day, he had a dream. In his dream, Farid heard a voice, a deep heavenly voice. “Go to Cairo,” the voice said. “Once there, you are sure to find the treasure you seek.” Farid woke up after the dream. He knew for sure his dream would come true if only he went to Cairo.

So, the next morning he began his journey to Cairo on foot. The journey had been long and took months but Farid soon found himself in Cairo. There, he took shelter in a mosque. That night, a few robbers entered the mosque as they wanted to get inside the neighboring house. The mosque and the house were connected by a door. As they tried to break in, they caused a lot of noise.

The noise made by the robbers woke the members of the house, who then called the police. When the police searched the mosque they found Farid sleeping. He was taken to jail and believed to be a thief. When Farid was presented in front of the Judge, he pleads innocent and told him of his dream.

“Why are you here?” the Judge asked. “My dreams led me here. They said I’ll find my treasure here,” Farid told the judge. “I too had those dreams. But I was a wise man, I knew it was an illusion. So I did not do anything about it. Only fools act upon dreams.” The judge only laughed at Farid.

“You believed that dream? I’ve had three dreams similar to yours only I was to go to Baghdad.” “I am from Baghdad,” cried Farid. “Well, the dream asked me to travel to Baghdad and find a sand colored house with a long red stoop with three palm trees in the front yard.”

“Which tree?” asked Farid. The Judge found this man amusing and told him that it was the middle tree. After that the judge realized Farid, believing that he was not a thief. According to the judge, Farid was only a fool driven by senseless dreams. But, Farid had other plans.

He left for Baghdad the moment he was realized and found the house. In the front yard, under the middle tree, he found a box of gold. “I found my treasure,” Farid sighed in relief. “My dreams led me to my treasure.” The gold was enough to last through his life. Farid lived happily after finding the box full of gold. Also, read Ali Baba And The Forty Thieves Story.