This is one of the good short stories for kids to read. Once upon a time, a golden swan lived in a pond. Near the pond lived a poor woman with her two daughters. The family was extremely poor and lived a very tough life. The swan came to know about the lady who was having a very hard time with her daughters. Also, read Greed Does Not Pay.

The swan thought to itself, “if I shed them one after the other one of my golden feathers, the poor lady can sell them and make money out of it. And her daughters can also live a life of comfort.” After a lot of contemplation, the swan went to the poor lady’s house. Seeing the swan at her home, the lady asked “why are you here? We have nothing to offer!” 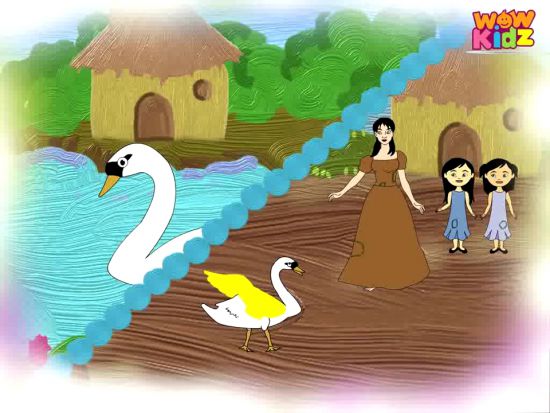 The swan replied calmly, “I have not come here to take anything from you. But I have a small proposal for you; I will shed one of my feathers one by one. You can sell them. The money raised from it can help you people live a comfortable life.” Saying this the swan shed it was one feather and flew off. Bit by bit, it became a regular routine, the swan used to come, and it’s one feather and leaves.

The mother and the daughter started living happily and were content with their life. But not the greedy mother. She became greedy to get all the feathers of the swan. The mother explained her daughters. “we shall not trust the swan hereafter. If she flies away with her feathers, we will have no feathers to sell and will be poor again. We will take all of its feathers the very next time it comes!”

But the daughters pleaded, “but it will hurt the swan, mother.” But the mother was highly determined to get all the feathers. So the next time when the swan came, she grabbed it and pulled all her feathers out. But to her surprise, the golden feathers of the swan turned into some another strange feather. The mother was completely shocked to see this. You may also like to read, A Father And His Two Daughters.

The golden swan told her, “all I wanted to do was help you. But you wanted to kill me. I used to shed my one golden feather as per my own wish. Now my feathers are nothing more than just mere chicken feathers to you. I think now there is no need for my help. I am going and never returning to this place again.” The mother cried and apologized for her mistake. “Never be greedy,” said the swan and left.

MORAL OF THE STORY: EXCESS GREED BRINGS NOTHING.