This is one of the short jataka tales with morals for kids. In a forest far away, there lived a single cuckoo bird. Now cuckoo, as you know, are known to be a wonderful singer. This cuckoo was a fantastic singer, too. Every afternoon, when the forest would become quite lazy, the cuckoo would raise its head and sing. And whenever the cuckoo would sing, the whole forest would take on a different look. Everyone would be excited and in high spirits.

Even the big animals loved cuckoo’s music. “What a lovely song! It’s truly a God gift!” roared the lion. “I can listen to this forever,” said the fox. “This voice is pure pleasure,” roared the leopard. Also, read The Lion, The Mouse, And The Cat. 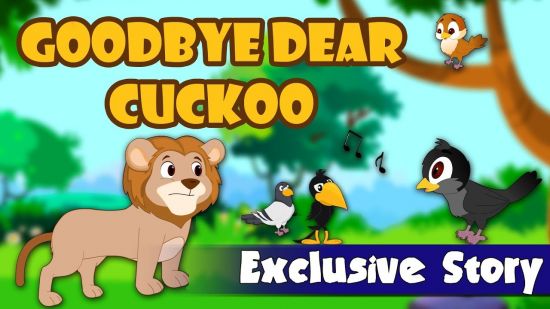 Though the cuckoo was well loved, the other birds did not like him. They grew jealous of the cuckoo’s popularity. “This cuckoo is becoming very popular. It is not good for us,” said vulture. “But, what can we do?” asked the pigeon. “That’s easy! We are many and that cuckoo is just one. All of us can easily drive him away out of the jungle,” crowed the crow. “Yes, let’s do that!” chirped the sparrow. Soon, they all set off to hoosh away the poor cuckoo. So, the other birds did their evil deeds. They drove the poor cuckoo away from the jungle.

But the real problem started the next day. The animals got agitated. “What happened to the cuckoo’s song today?” roared the lion. “Why is cuckoo not singing? Oh, this afternoon is so boring,” said the fox. “I need some entertainment. I need to do something,” roared the leopard.

And then the most horrible thing happened. Without anything else to do, these big animals started to kill the smaller animals for their fun. There was violence all over the jungle. They did not even spare the birds. Those were the same birds that had driven away from the cuckoo bird from the jungle. You may also like to read, The Crow, Cuckoo, And The Owl.

“Oh, what a terrible mistake! We should not have driven away the poor cuckoo from the jungle,” cried the vulture. “Since the day little cuckoo had gone, the peace of the jungle had also gone!” crowed the crow. “And now, we all have to pay for our wrong deeds!” cried the pigeon.

MORAL OF THE STORY: SOONER OR LATER, EVERYONE SITS DOWN TO A BANQUET OF CONSEQUENCES.

Here is a short visual depiction of one of the short jataka tales with morals “Goodbye Dear Cuckoo”. See the video story below,