This is Gulliver’s Travels Summary. Long ago in England, there lived a businessman named, Lemuel Gulliver. One day, he decided to travel to the South Sea with his friends. The sea was rough and a violent storm struck their old battered ship. All the sailors, including the captain, drowned. Even Gulliver’s friends could not be found. Gulliver was saved only because he held on tight to a large wooden log. He swam against the waves for hours and finally found himself near a piece of land.

Gulliver didn’t find anything on the shore except a few shrubs and trees. He was very tired from his long swim and soon fell into a deep sleep on the soft grass. When Gulliver woke up, he found that his arms and legs had been tied to the ground. Thin scratchy ropes were slung across his shoulders and chest and would not let him move. Then he saw a couple of tiny men dressed as soldiers, walking on his chest. And these tiny men could talk, they had captured Gulliver and took him as their prisoner. They told Gulliver that they were taking him to their capital city called Lilliput. 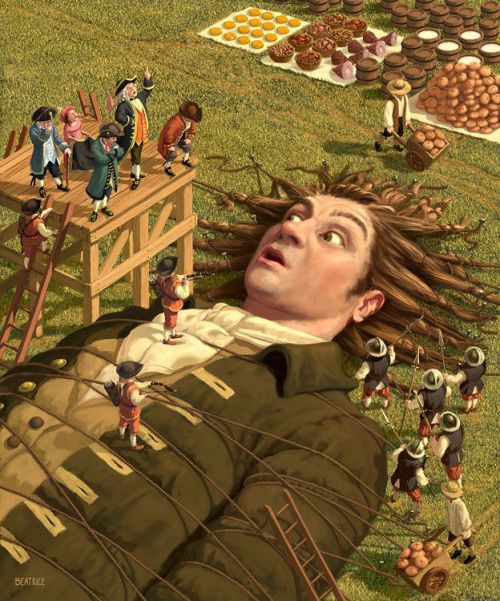 Hundreds of Lilliputians thronged around to see this giant. They fed Gulliver tiny green apples and bright yellow bananas and build a platform with wheels to start their long journey towards Lilliput. They arrived in the capital city. Gulliver was astonished to see an entire world of tiny trees, houses, animals, and men all around him. And then he was brought before the king. He knelt down before the king and asked him if he could stay in Lilliput. The Lilliputians no longer thought that Gulliver was a giant sent to destroy them. They started to trust him.

One day, the king invited Gulliver for his birthday celebrations. Suddenly, a fire broke nut in the palace. Gulliver pulled a stone fountain from the garden and pour the water on the flames. The Lilliputians were very pleased with him and so they decided to build a house for him.

Also, read The Adventures of Sinbad

After some days, Gulliver saw a fleet of ships from the neighboring land of Blefuscu coming to wage war on Lilliput. Gulliver waded through the water to stop the Blefuscuan attack. The spears hit Gulliver like tiny needles and had no effect on him. He took a deep breath and blew hard and the ships toppled over like little toys. The Blefuscuans were defeated. Gulliver was declared a national hero and a huge celebration was held in his honor.

Then one morning, as Gulliver was sitting by the sea, he saw a huge log floating out on the water and he was reminded of his family. Gulliver expressed his wish to the king to return home. The king ordered his men to build a ship for him. The Lilliputians used the log to make a beautiful boat.

All the Lilliputians gathered on the dock to bid farewell to Gulliver. They gave him some animals as gifts- cows, horses, and sheep. They made sure that he had sufficient food and other necessities for his long journey. Gulliver bid the Lilliputians farewell. Gulliver was sailing for many days until finally, he spotted a ship. They rescued him and brought him home to England. His friends were amazed to see the tiny animals.

Gulliver told them of his adventures in the land of Lilliput, and because his memories were so fond. Gulliver decided that he would travel back to Lilliput again soon.

Here is a visual depiction of, “Gulliver’s Travels”. See the video below,