This is one of the best inspirational stories for children. The Sports Day was fast approaching in the school. All the children were very excited and were practicing for the big race. Jim, one of the fast runners of the school was confident that he would win for he was not doing anything at all. “You have to work hard to come first in the race, Jim. You are not practicing at all,” said Jim’s mother.

“Mom, you know how fast I am! Then why should I waste my time running? Only I will win, no one else will win!” exclaimed Jim. “Jim, you may be right but talent without hard work is not good at all. This laziness of yours will cost you greatly,” his mother warned him. Jim just laughed and shrugged his shoulders. He was so confident that he would win trophy as no one else in his class was as fast as he was! Also, read Shake Off All Your Problems. 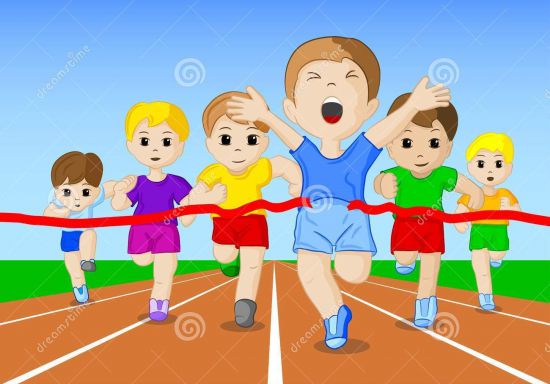 Image Source@ www.canstockphoto.com. Tim, a classmate of Jim was also participating in the running race. He was not a fast runner. However, he was very dedicated and practiced till late night and had developed great endurance and willpower to run the race.

There were a few days left for the Sports Day but Jim did not practice at all. On the other hand, Tim practiced day and night. The sports day was almost around the corner but Jim was confident that no one could beat him and had practiced not all all. But Tim with his dedication and hard work had become a very swift runner.

At last, the Sports Day arrived. All the students crowded the ground to cheer their favorites. The signal was given to the participants to begin the race. The coach blew the whistle and everyone began to ran towards the finishing line. It was so exciting. Jim and Tim left all the racers far behind. Both of them were neck to neck. Also, read Anger And Love.

Suddenly, Jim went ahead of Tim. The crowd cheered for him. Soon, it was clear that Jim was going to beat Tim. But, when they were just a few meters away from the finishing line, Tim surprisingly took speed and ran ahead of Jim and reached the finishing line. Tim surprised everyone with his brilliant performance. He proudly received the trophy and the prize money.

Jim’s mother came to Tim and praised him for his hard work and said, “You deserve it for your dedication and effort!” “Thanks, Miss!” Tim replied with an open smile and walked happily with his trophy. Jim hung his head in shame. His mother turned to him and said, “Look Jim, talent without hard work is simply useless. That boy put efforts and got rewarded for his hard work. Hard work is the only way to success!” Now, Jim understood the importance of hard work. This incident brought about a major change in his life.

MORAL OF ONE OF THE BEST STORIES FOR CHILDREN: NOTHING CAN BE ACHIEVED WITHOUT HARD WORK.