This is one of the awesome panchatantra tales in english. Once in the village, a farmer was working in the field. He saw an elephant climbing down from the sky. He was astonished to see it and thought to himself, “No elephant can fly on the Earth. It must be a heavenly elephant! It should be an elephant of God.”

After some time, the elephant was going to leave. Before he could fly, the farmer caught the elephant by its tail so that he could go to heaven with it. The elephant started climbing up in the sky and so did the farmer with it. As they reached heaven, the farmer was stunned to see such beautiful place. “There should be plenty of good things for me to take,” the farmer wondered. Also, read The Sparrow And The Elephant. 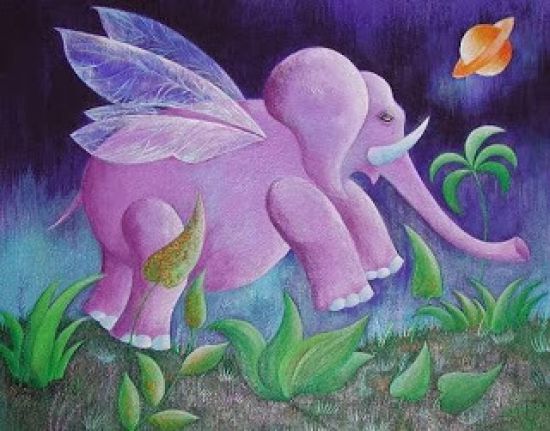 Image Source–> www.goodreads.com. The farmer took the valuable things and put them into his pocket. He wanted to get back to the Earth. Suddenly, there came the same elephant who took him to the heaven. He caught its tail again and elephant started to climbing down and reached the same field.

Next day, when the farmer told everyone in the village and showed them the valuable things he had brought, everyone was astonished to see this. The farmer said, “And it is such a joy to work there! You get one measure of food for every hour of work and their measure is large!” One of his friends asked, “How big is the measure?” The farmer opened his hands wide and said, “This big!” After hearing him, all the farmers wanted to go to the heaven with him.

The next day, the farmer took them there where he had seen the elephant yesterday. “Quiet now! Be silent! The noise may disturb the elephant or it may not land here.” All the friends agreed. The same friend of his asked again, “How much did you say they pay for an hour’s work up there in the heaven?” The farmer replied, “One measure of food!” Another friend asked, “How big is the measure?” The farmer opened his hands wide and said, “This big!” You may also like to read, The Elephant And The Rope.

Soon, the heavenly elephant appeared. The elephant landed and when it was about to leave, they all took him by its tail one by one catching each other. And soon, all the farmer’s friends were flying upward in the sky. “We’ll stay there as long as we can and we’ll return with heavy loads of food and other valuables,” said one of his friends. All of them said excitedly, “Yes, we will!”

Again, the same friend of the farmer asked, “How much did you say they pay for an hour’s work?” The farmer replied, “A measure of food!” As always, he again asked, “How big is the measure?” And as always, the farmer opened his hands wide and said, “This big!” As he left the elephant’s tail, all of them fell into the river. The elephant was so frightened by the noise that it never came back to these fields again. Also, read, Elephant And Tailor Story.

MORAL: NOTHING IN THE WORLD IS MORE DANGEROUS THAN SINCERE IGNORANCE AND CONSCIENTIOUS STUPIDITY.

Here is a visual depiction of one of the great panchatantra tales in english, “Heavenly Flying Elephant”. See the video story below,