Once upon a time, there was a little girl named Heidi. Due to the loss of her parents, her aunt was taking care of her. But one day, she took Heidi to her grandfather’s little hut in the mountains. Grandfather Alm was a grumpy old man who lived in the small hut on the alps. This was the first time when Heidi saw her grandfather. Telling him that he had found a job in another city, her aunt left her with her grandfather and returned to the city.

Grandfather Alm, who was used to live in an isolated life away from the people was actually glad that his granddaughter was there but did not show it to her. The old man prepared a nice, cozy bed for her. She loved her grandfather from the first sight and happy times were about to begin for her in the mountains. 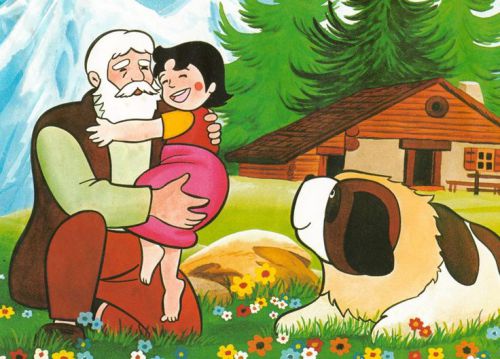 When she woke up in the morning, she was introduced to her grandfather’s very big dog, Joseph. Heidi loved Joseph. Then one day when she was hiking on the hills, she met Peter, the Shepherd. He was grazing his goats. “I haven’t seen you ever here before,” Peter said. Heidi replied, “Yes! I just arrived. I  have come here to live with my grandfather from now on.” In a couple of days, Peter started to take Heidi with him to graze his goats in the maidens. They started to hike together in the mountains. Everything was so new and exciting for her. She learned a lot from for Peter about how to be a Shepherd.

Even though he didn’t show it much, but Grandfather Alm loved Heidi very much. Running around and having fun in the fields all day long, Heidi was very happy. She was a very caring girl as he never forgot to help her grandfather in the housework. One of her favorites was to bake bread in her grandfather’s wood oven. She used to take the bread for Peter’s grandmother and in return, Peter’s grandmother would give her fresh goat milk to drink.

One day, summer was over and it was winter time. When Peter started to go to school, she was left alone and eventually got bored. She was really upset that she was too small to go to school like Peter. One day her aunt came back to take her back to the city. She was going to get homeschooling and work. Grandfather Alm was very upset at first and didn’t accept. But when he thought about it, he realized that it would be best for her to stay in the city and learn to read and write. “But I don’t want to leave you! I love my grandfather!” cried Heidi.  But she was convinced to go after her aunt promised her that she would be back after a short while to the mountains.

They both arrived in a big mansion after a long train ride. “Wow! What a big house! I am going to stay here,” said Heidi happily. There, she met Clara, the little girl in the house. Clara couldn’t walk because of an accident she had when she was a little child. Her aunt actually brought Heidi to this house to keep Clara company. Clara and Heidi soon became best of friends. Not knowing much about the urban life, Heidi was making Clara laugh with her silly mistakes. Clara’s grandmother was very tough and strict lady, “Get up you lazy girl! It’s time to study! You still have a lot to learn,” shouted Clara’s grandmother.

Clara’s grandmother was trying to teach Heidi a lot from how to sit and stand up properly and how to use knife and fork at the dinner table. And she was even dressing like the ones who live in the city, but she wasn’t feeling comfortable with these dresses. Clara also helped Heidi to learn read and write. She did like being with Clara and all but she missed the mountains and her grandfather a lot. Heidi couldn’t even eat because of her sadness. Clara’s father and grandmother realized her sadness. After a while, they decided to send her next to her grandfather. But Clara was very sad because Heidi was leaving. The grandmother made Clara understand about Heidi’s sadness. At last, it was time to say goodbye! While Heidi was leaving, her aunt told her that Clara would visit her in the mountains next year.

Happy to be back to the mountains, she first went to Peter’s house to give bread to Clara’s grandmother that Clara’s grandmother had sent for them. Leaving the fancy dress behind, she went home running and hugged her grandfather as tight as he could. And they were happy again. A while later, she was high in the clouds of happiness because of the letter she received saying Clara would going to visit her soon.

Being in the alps, Clara liked Peter a lot but Peter was a bit hesitant because he was afraid that Heidi was going to back to the city with Clara. Clara, Peter, and Heidi were having the time of their lives in the hills. The fresh mountain air and fresh fruits were really good for Clara. But Peter started to get very jealous of Clara because of her close friendship with Clara. Peter also didn’t like to carry Clara to her wheelchair and push her around.

One day, he pushed Clara’s wheelchair off from a cliff. He thought that this would solve everything. Without her wheelchair and with the fresh mountain air, Clara became much stronger and she even started to walk with Heidi’s help. After a while, she started to take steps without any help. “I can walk! Yayy! I owe this to you,” said Clara.

One day, Clara’s father and grandmother came to visit and when they saw Clara walking, they couldn’t believe their eyes. They gave their thanks to Grandfather Alm and Heidi. Peter also realized his mistake and he was feeling sorry for what he had done. He confest to push Clara’s wheelchair off the cliff. All of them forgave him. They all laughed with joy. Clara and her family promised to visit next summer and they all lived happily ever after.

Here is a visual depiction of, “Heidi Story”. See the video story below,