The House Of Simon

This is one of the great bible stories for kids. Long ago, Jesus was invited to the house of a man called Simon. He lived in a town called Naine. Simon was a Pharisee which meant he lived strictly following all of the Jewish laws. Simon did not believe Jesus to be one of the prophets of god. When Jesus entered his place and sat at the table, a woman walked in the room.

She knelt down before the Jesus and cried softly. Her tears fell on Jesus’s feet and she wipes it with her hair. She had with her a jar of expensive oil. She covered his feet with kisses and spread the perfumed oil on his feet with her own two hands. Also read, Ruth And Naomi Bible Story. 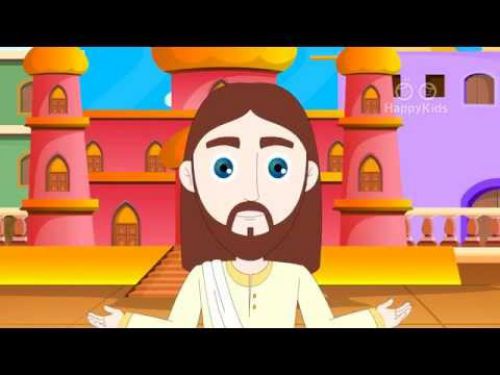 Simon was surprised. The woman had a bad reputation in town. Simon thought to himself as to how Jesus could allow this. Knowing what he was thinking, Jesus told Simon the story of two men who had borrowed money from a money lender.

One man borrowed 100 silver coins and the other borrowed 50 silver coins. Both of them could not pay back the money to the money lender. The money lender was a good man, so he canceled their debts. At the end of the story, Jesus asked Simon, “Tell me, which man out of the two would be grateful?” Simon replied, “Obviously, the one who borrowed more money.”

Jesus then explained to Simon, “When I entered the house, you did not give me a kiss of friendship. Neither did you touch my feet nor did you anoint me with oil. This sinful woman, on the other hand, showed me so much of love.” Jesus then turned to the woman and told her that all of her sins were forgiven.

Here is a visual depiction of one of great bible stories for kids, “The House Of Simon Story”. See the video story below,