How The Crows Became Black

This is one of the really Dreamtime stories for kids to read. Once upon a time, a long time ago the crow used to be white in color. It had the most beautiful and pure color, unlike what we know today.

In those times the crow was the most magnificent and the prettiest bird around. The crow was worth the praise it got. And quite soon, the crow also became arrogant. “Oh,” he would often praise himself, “I have the most beautiful set of wings. And look at the color! No other bird’s color can even begin to match mine!” Also, read The Imitating Crow. 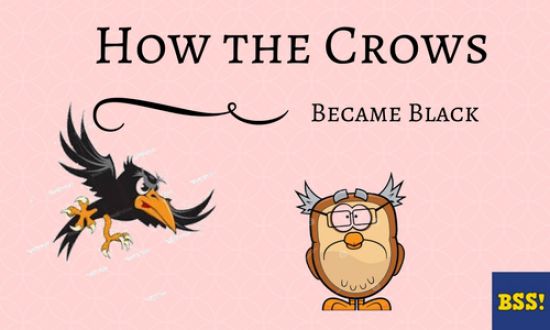 An owl lived in a tree nearby. Now this owl had a dying shop. The owl could dye any color and anything. He had dyed articles as well as bird’s feathers. “So many colors! I want these colors on me,” the crow would think while watching the owl.

One day, the crow decided to pay the owl a visit. When he reached there, he greeted the owl and said, “I have always admired your work. I find all these colors fascinating.” The owl was happy to hear his praise. So, he asked, “What can I do for you?”

The crow, greedy for appreciation and more praise had plans to become even prettier. “I want you to make a special color for me. And mind you, it should be the best in this entire world. I want to be the best-looking bird, and you will make a beautiful blend of different colors for me!” You may also like to read The Crow And The Peacock Story.

“I will give you what you want!” the owl agreed. “But it won’t be ready today. Please come tomorrow.” And so, the crow came back the next day. “From today onwards, no one will be as beautiful as me!” the crow thought.

By the time the crow reached there, the color had already been poured into the bucket. No sooner did the owl tell the crow it was for him, the crow jumped right in! “Finally, I am the prettiest!” However, when the crow looked at himself, all he could do was scream!

“Black?” he shouted. “Why am I black in color? This was supposed to be pretty!” By now, the owl had realized his mistake and had begun retreating. “You, owl! Come back here! Wait till I catch you.” Also, read The Thirsty Crow.

Since that day, the crows have chased the owls and the crows have been black! What really had happened, was that the owl had been too bothered to put on his spectacles. Because of that, he made the mistake of adding the color black in the mix instead of lilac!