How The Kangaroo Got Its Pouch

This is a dream time story for kids, how the kangaroo got its pouch. It has been adapted from an Australian folktale. A long time ago in the grasslands of Australia, a mother kangaroo was looking for food along with her joey. The mother kangaroo and her joey were by the river bank when an old wombat staggered towards them. The mother kangaroo said to her baby, “this wombat looks old and sick, he must have many grandchildren!” Also, read How The Camel Got It’s Hump. 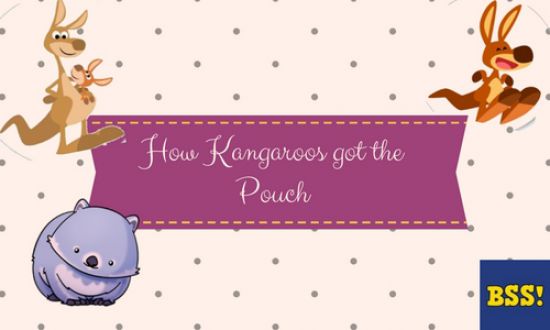 how the kangaroo got its pouch

Then the wombat told her that all the others had abandoned him because he was old and blind. “Don’t worry. I’ll be your friend”, said the kangaroo. The kangaroo also said that she’d show the wombat where to find the freshest and tastiest grass.

In that manner, the wombat became friends with the kangaroo and her joey. But soon after showing the wombat a place to find the best grass, the mother kangaroo found her baby missing. “I wonder where did this child wander off to again?” You see the Joey always got lost while the mother looked for food.

Soon, the mother kangaroo found the Joey sleeping beneath a tree. “Oh dear, look at him sleep so peacefully”, she thought. Deciding not to wake the child, the kangaroo goes back to the wombat. But before she could get to the bat, she saw an aboriginal hunter who had his eyes set on the wombat. Also, read The Swan And The Owl.

Now, the kangaroo had grown attached to the bat, she did not want him to get hurt. So she thumped loudly so as to catch the bat’s attention. And when she caught the wombat’s attention she yelled, “run, run! A hunter is stalking you!” The wombat quickly flew away without caring which way he went.

Now, the wombat was out of trouble, but the hunter had set his eyes on the kangaroo. The kangaroo hopped as fast as she could. She ran further into the grasslands, away from the tree where her child was sleeping. Soon she came to a cave, inside she collapsed. “At least the hunter will kill me in the darkness of this cave. The other animals won’t be forced to see,” the mother kangaroo thought.

But the hunter crossed the mouth of the cave without looking inside. The mother kangaroo waited for the hunter to return. When the hunter went back empty handed, she knew it was safe to come out. She quickly made her way back to the tree where she knew her baby was. “Oh, you’re awake now”, she said when she found her baby. “Let’s go look for the wombat.”

But the two of them could not find the wombat. What the kangaroo did not know that the wombat was the God, Byamee in disguise. Now he had descended from the sky to find out the kindest animals. And he wanted to give them a gift. Also, read A Wise Old Owl Story.

Now that the God had found the kindest mammal he decided to give them a gift. So, he gave the Kangaroos a pouch, which grew out as their own skin and fur. “With this pouch, you shall be blessed forever. For all your generations, you’ll have these pouches. And you shall never lose your child again!” And since that day the Kangaroos have had a pouch and they have never lost their children again!