How The Kangaroos Got Their Tails

This is one of the best Dreamtime stories for kids. In the early days, in the Dreamtime, there were two Kangaroos who lived in this country. One came from the hills, the other from the plains. The plains Kangaroo was a big Kangaroo with long arms and long legs. The hill Kangaroo was a short Kangaroo with small arms and short legs.

One day, the short-armed Kangaroo was walking around hunting for sugarbag which is wild bush honey. You can find sugarbag by watching the bees, and following them to their hive where they make the honey. The short-armed Kangaroo really liked sugarbag. He reached just inside the hole and pulled out a handful of sugarbag and ate it. “Mmmm… It was good tucker!” he said. Also, read How The Kangaroo Got Its Pouch. 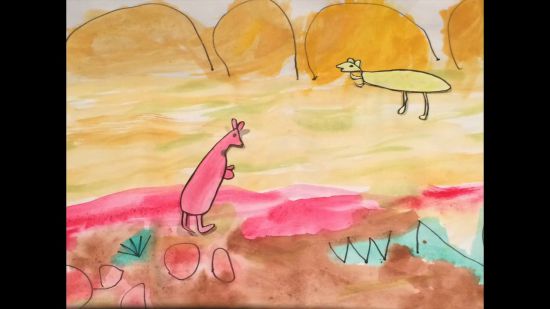 “Try again”, said the short-armed Kangaroo. “Put your arm right down into the hole- that’s where the sugarbag is!” So the big Kangaroo put his hand into the hole again but only pulled out more spiders. The short- armed Kangaroo kept reaching just inside the hole and pulling out more and more sugarbag. Pretty soon, he had eaten all by himself.

The big Kangaroo was wild. The short-armed Kangaroo had tricked him. He went ver to the white gum tree and broke off a big stick. The short-armed Kangaroo thought he’d better get a stick too. He went and broke one off a red bloodwood tree. And then they started to fight. They hit each other over the head with those sticks until the big Kangaroo ran away. You may also like to read, How The Rabbit Lost Its Tail.

Then they each hopped away back to their own country. The big Kangaroo went back to his low country where the sugar-grass grows, and the short-armed Kangaroo hopped away up into the hills. “I’m a sugar-grass country man now,” said the big, red, plains Kangaroo. “I’ll live here forever!” That short-armed Kangaroo said, “I’m a boulder country man. I’ll live in the hills amongst the boulders and spinifex.”

And they are still there today. When you see them, you will know how they got their tails. Also, read Rainbow Serpent Story.

Here is a short visual depiction of one of the dreamtime stories for kids “How The Kangaroos Got Their Tails“. See the video story below,

Tagged with: dreamtime stories for kids