I Heard the Bells on Christmas Day

I Heard The Bells On Christmas Day poem was written by the American poet, Henry Wadsworth Longfellow. It was first published in the year 1863, which later became a popular Christmas Carol. Also, read Frosty The Snowman Song.

Right before writing the poem, the poet suffered the death of his wife of eighteen years. And right after that, his son joined the army when the American Civil War broke out. The author too felt the despair, but as the poem suggests, he found his peace soon.

I Heard the Bells on Christmas Day Song 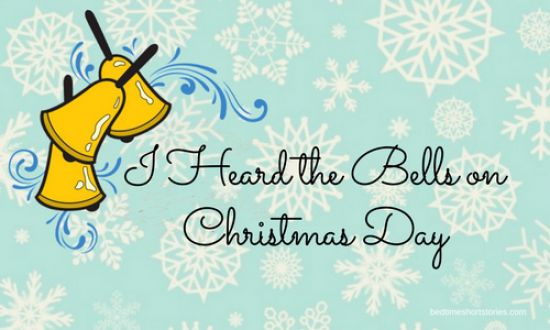 The poem begins with the poet talking about the church bells ringing before Christmas day. He writes that he could hear the same, familiar tunes. The repetitive words and tunes seemed to say “peace be with you.”

Next, the poet talks about how the world simply goes round and round, day and night singing and merry until Christmas day. But then, the poem turns and darkens for a bit, showing the despair and pain in the world. The poet talks about the cannons which blast away from their black mouths. The poet even calls these mouths “accursed black mouths”. You may also like to read, Twas The Night Before Christmas Poem.

He then speaks of the deafening sound, which also kills many people. What the poet is trying to show is the massacre created by the cannons. This feeling becomes more evident when the poet uses the sentence, “there is no peace on earth.”

And as the poet bowed his head in despair, he heard the bells louder than before. The bells chimed and rang and appeared to be saying that “God is not dead, and he doesn’t sleep either.” He also understood that the wrong will always be wrong, and the good things in this world will always prevail.