This is the great inspirational stories courtesy for children. Once upon a time, there lived a poor man who lived in a village. He lived with his wife. They were so poor that they did not get enough to eat, even two meals a day. One day, his friend from some other village came to visit this poor man. Even though the poor man had almost nothing, he very gladly and generously received his guest and allowed him to stay.

Even though the poor man had almost nothing, he very gladly and generously received his guest and allowed him to stay. That night, the poor man told his wife that their guest should be fed well since being courteous to guests is very important. Also read, Unity Is Strength. 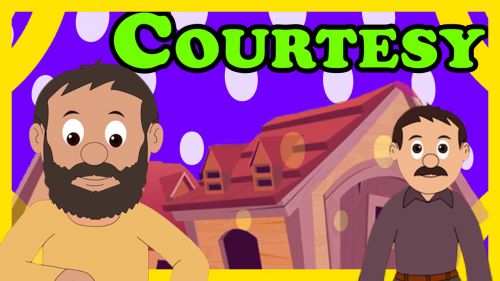 He also told her that serving to the guests is like serving to the god. The wife got very angry. She had absolutely nothing in her kitchen to offer the guest. The wife went on arguing with her husband but the man kept his cool. He told his wife that they should offer some food to the guest or else it would not look nice.

Finally, the wife found some sesame seeds in the kitchen. She quickly prepared a sweet cake with the sesame seeds and offered it to their guest. The guest was very happy and was overjoyed to see the cake. The guest went home happily. He also invited his friend to visit his place and promised to visit him soon.

MORAL: OFFERING FOOD TO THE GUEST IS THE SIGN OF COURTESY. IT SHOWS THAT YOU IS GLADLY WELCOMING THEIR VISIT OR COURTESY IS THE SIGN OF GOOD BEHAVIOR.

Here is a visual depiction of the great inspirational stories courtesy. See the video story below,