This is one of the most famous inspirational stories unity. In a forest, there lived a group of pigeons in a big tree. And under the same tree a rat lived. The head of the pigeons and the rat were the thick friends. One day, rat came to the head pigeon and told his that he had to go to a nearby town. He invited the head pigeon over there. Saying this, the rat left the place. 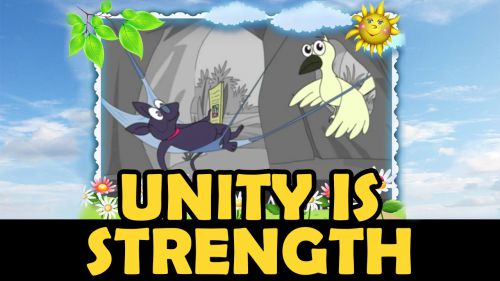 The all the pigeons realized that they are not able to move their legs. All of them were caught in the net. The head pigeon said, “If you would listen to me, we would not have fallen in trouble like this.” After a long discussion, they all decided to fly together at a time so that they can fly off the net and reach the nearby town where the rat is staying. The rat would help them to release from the net. All the pigeons listened to what there head had instructed and flew together with the net and reached the nearby town.

The head pigeon called the rat and the rat was ready to rescue them. The rat ran out and brought all the other rats. They all cut the net with their sharp teeth. And within seconds, they all were free. The head pigeon thanked the rat. The rat invited all of them for dinner. The rats and the pigeons had a very good feast and enjoyed the day together. Also, read Inspirational Stories Courtesy.

Here is a short visual depiction of “Inspirational Stories Unity“. See the video story below,