Its Raining Its Pouring

This is Its Raining Its Pouring Nursery Rhyme for kids. The origins of this poem are not clear. But it is believed to have its origins in England. This poem is known to be sung by little children when it was raining outside. Also, the children used to sing this rhyme as a chant. It is common in England to say “it is pouring,” rather than “It is raining”.

The melody of the rhyme is often associated with the other rhyme, “A Tisket, A Tasket.” And the first two lines can also be found in The Little Mother Goose, published in the early 1900s in the US. You may also like to read, One Little Finger.

Its Raining Its Pouring Poem 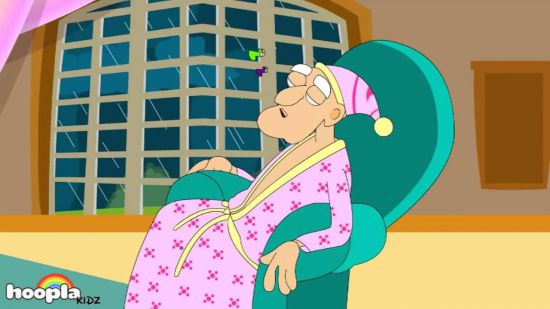 its raining its pouring

The old man is snoring.

He bumped his head and went to bed

And he couldn’t get up in the morning.

The old woman is snoring.

He bumped his head and went to bed

And he couldn’t get up in the morning.

All the children are snoring.

They went to bed and bumped their heads.

And they couldn’t get up in the morning.

The nursery rhyme begins with, “It’s pouring, It’s raining”, suggesting that it is already raining outside. In the first stanza, there we find an old man. This old man is snoring in his chair. And when he wakes up,  he bumps his head and goes to sleep.  Next morning, the old man couldn’t wake up!

The following stanza opens with the same lines, suggesting it is still raining outside. In this stanza we find an old woman snoring. Even she bumps her head and goes to bed. The next morning, she could not wake up. Also, read Oranges And Lemons Rhyme.

The next stanza has the same opening as its predecessors. It is still raining outside. This time we find children snoring. They bump their heads and go to sleep. The next day, they could not get up!

Tagged with: it's raining it's pouring song, its raining its pouring, nursery rhymes, rain song, rhymes for kids