Jack and the Beanstalk Story

This is the Jack And The Beanstalk Story. Long ago, there once lived a poor widow who had an only son named Jack. Jack was very lazy, he never did any work. As time went by Jack and his widow mother became poorer and poorer. One summer day, Jack’s mother decided to finally sell the cow, she did not give any milk anymore. She asked Jack to go to the market and sell the cow.

Jack took the cow and set out for the market, he hadn’t gone very far when he met an old man. The old man asked where Jack was going with the cow. “I am going to the market to sell her,” Jack replied. The old man smiled and took out a piece of cloth from his pocket, opening it he showed Jack five beans. He told Jack that the beans were magical beans. “I will exchange these beans for the cow. If you plant the beans tonight, they’ll grow into the sky by tomorrow morning.” Also read, Wizard Of Oz Story. Jack thought it was a fair exchange because it meant he could go home right away and lie in the sun. After making the exchange he ran back home, excited to have the magical beans. After reaching home, he showed the magic beans to his mother. Upon seeing some ordinary beans in her lazy son’s hands and no money, his mother got very angry and threw the beans out of the window. “You are stupid as well as lazy!” she scolded him and sent him to his bed without dinner.

The next morning Jack slept until late in the morning, when he woke up he wasn’t sure where he was. The room was dark. He quickly ran to his window and opened the curtains of his windows, when he did he was very surprised. He saw huge leaves and bright red flowers. Jack hurriedly dressed himself up and ran out into his garden.

Just outside the window, where his mother had thrown away the magical beans, grew a huge beanstalk. It went up into the sky and disappeared among the clouds. Without wasting another moment Jack quickly began climbing. He climbed and climbed,  he climbed higher than the houses, higher than the treetops, higher than the clouds, he climbed until he reached the blue sky. There he found a white straight road and started walking on it. 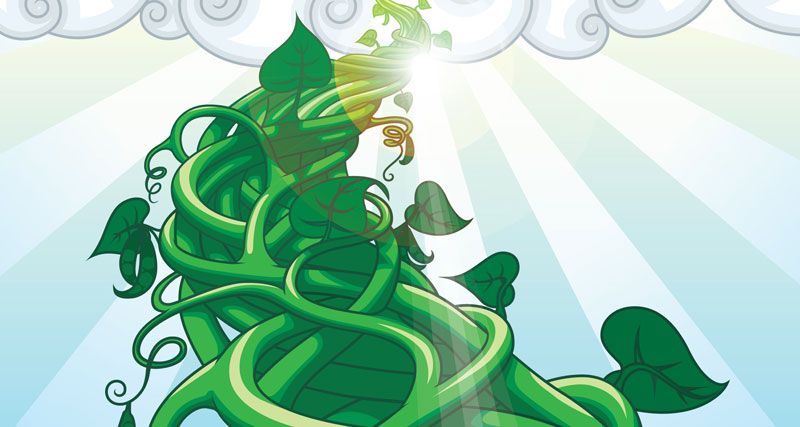 By now he had become very hungry, so he kept walking hoping to find a place where he could beg for some breakfast. To his delight, he saw a castle with a large woman standing at the door. “Good morning!” Jack greeted her politely, “Would you be so kind as to give me some breakfast?”

The large woman looked at him and told him to run as fast as he could if he did not want to become breakfast himself. She also told him her husband was an Ogre and he liked nothing better than fried little boys for his breakfast.

Jack was scared, but he was too hungry to go back. He pleaded with the Ogre’s wife and asked her if she would hide Jack from her husband. The Ogre’s wife was kind, so she took Jack in and gave him some bread and milk. Just as Jack was finishing his breakfast, he suddenly heard a noise.

It was the Ogre. He was walking on the white road towards the castle. The Ogre’s wife grabbed Jack and hid him in the oven. The Ogre came in loudly singing “I smell an Englishman. I’ll grind his bones and make bread.” The Ogre’s wife laid down his breakfast on the table and said “Nonsense! You are always saying you smell Englishmen. Now eat your breakfast.”

Jack peeped out of his hiding-place and was terrified to see the huge Ogre. He was big and ugly. After finishing his breakfast the Ogre asked his wife to bring him the bags of gold coins. The Ogre counted the coins from the bags his wife brought him and then fell asleep. Jack saw that the Ogre was fast asleep, he quickly came out, climbed the table, and grabbed one of the bags of gold coins. He ran away from the castle and straight down the road, down the beanstalk to his own garden. Once in his garden he ran to his mother, “Mother, look what I have brought for you from the top of the beanstalk! ” he exclaimed as he emptied the bag of gold coins onto the kitchen table. The poor widow was pleased to have her boy home and now they had money to buy whatever they needed.

Some days later, Jack took a look inside the bag and noticed there weren’t many gold coins left. He decided to climb the beanstalk one more time, but this time, he disguised himself so that the woman would not recognize him. When he reached the castle the woman let him in like the last time and gave him some food. You may also like, The Giving Tree Story.

The Ogre returned to the castle in the evening, whereupon Jack hid in a copper pot. The Ogre called his wife, this time, he asked her to bring him his golden hen. The wife brought him the hen and placed it on the table. “Lay!” roared the Ogre and the hen laid an egg. A solid gold egg.

“Lay another!” commanded the Ogre, the hen laid another solid gold egg. Only this time, bigger than the last one. When Jack saw the golden eggs, eyes his eyes nearly popped out of his head.

Soon after that, the Ogre fell asleep on the table and when Jack was sure nobody was around, he came out of hiding. He climbed out of the copper pot and grabbed the Ogre’s precious hen. The moment Jack grabbed the hen, it began to squawk. Jack quickly ran towards the door.

The Ogre woke up when he heard the hen squawking. He started running after Jack when he saw that Jack was running with his hen. Jack ran as fast as he could on the white straight road with the Ogre chasing him. The Ogre’s strides were big, even though Jack was running faster than he had run in his entire life, Ogre was almost close. The people in the world below thought they heard an earthquake.

Just as the Ogre reached out to grab Jack, Jack slipped swiftly down the beanstalk. The Ogre was furious,  he stopped for a moment and wondered if the plant could handle his weight. Then he began to climb down the beanstalk, slowly. The beanstalk began to sway and creak. Jack realized that the Ogre was climbing down after him, he went even faster than before. When he reached his garden he shouted, “Quick mother, bring me the ax!”

He grabbed the ax from his mother’s hand, handed the hen to his mother, and quickly began chopping the beanstalk. As Jack chopped the beanstalk, it swayed and creaked, then it crashed into the ground along with the Ogre. The Ogre lay dead among the bright red flowers and massive leaves of the magical beanstalk.

Jack and his mother lived with the hen that lay golden eggs happily ever after. The hen brought them more riches than they could ever spend.

Here is a visual depiction of, “Jack And The Beanstalk Story”. See the video story below,

Jack And The Beanstalk Story Video