This is the Jacob And Esau Story from Bible for kids. Long, long time ago, a good man called Abraham had a son named Isaac. Isaac grew up to be a young and handsome man. Abraham started for looking for a wife for him so that he was not alone and could have children. He asked his loyal servant to find a wife for Isaac. The lord helped them find Rebecca, the daughter of Bethuel. More about Jacob and Esau.

Abraham’s servant got Rebecca along with him to be married to Isaac. When Isaac was sixty years old, Rebecca gave birth to twins. The first son had braid hair and had hair all over his body and was called Esau, which meant hairy. The second son was born was born holding onto the heel of Esau. He was called Jacob which means a cheat. Esau grew up to be a good hunter and he loved the countryside while Jacob was a quiet man and he usually stayed at home all by himself. Also read, David and Goliath Story. 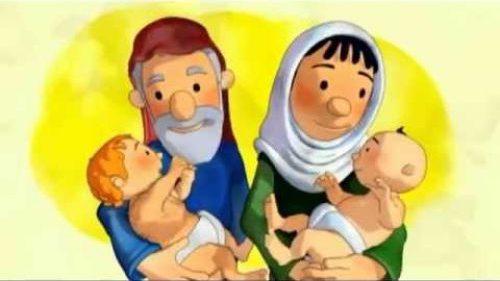 One day, Jacob was cooking some bean soup when Esau came back from hunting. He was very hungry and he said to Jacob, “I am very hungry, brother. Please give me some soup!” Jacob who was very cunning and greedy thought for a while and said, “You can have this soup only if you promise to give me birthright.”

In those days, it was the eldest son who received the father’s last blessings and more than half money after his death. Esau was so hungry that he promised Jacob his birthright without taking it very seriously. Jacob gave him some soup and bread which Esau ate and left.

Years later, Jacob mother, Rebecca helped him trick his father, Isaac as well. And Isaac gave Jacob the blessing which was meant for Esau. As a result, Isaac gave everything he had to Jacob while foolish Esau got nothing. You may also like, Cain And Abel Story.

Here is a visual depiction of, “Jacob And Esau Story”. See the video story below,