Jesus And The Fishermen

This is Jesus And The Fishermen Story for children. Long, long time ago, Jesus needed his friends to help him to spread God’s message. As he walked down by the Sea of Galilee, he saw two fishermen put their nets in the water to catch fish. Also, read Jesus Calms The Storm.

They were brothers and their names were Simon and Andrew. Jesus called out to them and they came to the shore. Jesus said, “Follow me! And I will make you special fishermen of the people!” The two men left their nets at once and joined him. They had understood that Jesus was the promised Savior. 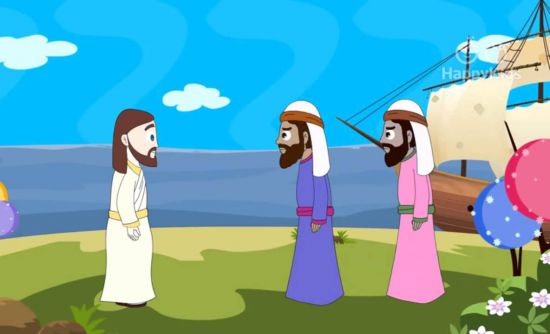 As he went along, Jesus came across another two brothers, James and John. They were sitting in a fishing boat. They were repairing their fishing nets with some help from their father, Zebedee. When Jesus called out their names, they left their nets and their father and joined Jesus. They too knew that Jesus was sent by God.

These people would get many others to join the Kingdom of God. They stayed close to Jesus, learned from him and helped him as he went around the worked teaching and healing people. You may also like to read, The Baptism Of Christ.

Here is a short visual depiction of “Jesus And The Fishermen Story“. See the video story below,

Jesus And The Fishermen Story Video