Kallo And The Goblins

This is one of the awesome bedtime stories for babies. Once upon a time, in Greece lived an enormously fat lady. She had two daughters. Marbo was the older one and Kallo was the younger one. Marbo, similar to her mother was vast and extremely fat whereas Kallo was slender and beautiful. The villagers and the people all loved Kallo. They praised

The villagers and the people all loved Kallo. They praised Kallo and her beauty. Marbo became extremely jealous of her younger sister. As a result, Kallo was forced to do all the chores of the house. She did her share of the work as well as Marbo’s. Also read, Stone Soup Story. 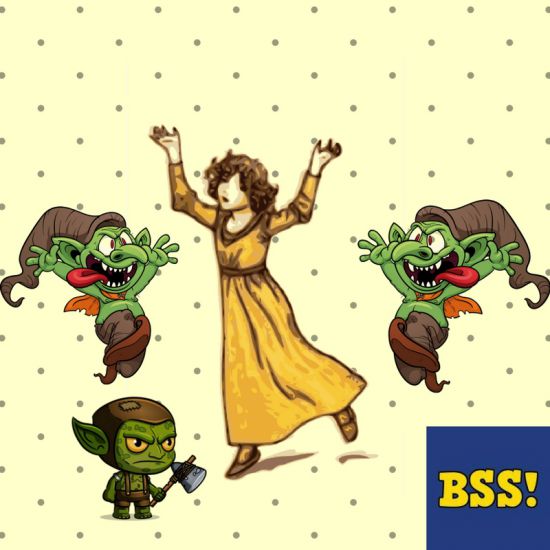 One day, the mother went into the pantry to look for some flour but did not find any. “Marbo,” the mother called, “will you go to the mill and grind some wheat?” “No, send Kallo instead,” Marbo bluntly replied.

So, Kallo loaded their donkey with sacks of wheat and went to the mill. As soon as Kallo reached the mill, she saw many people waiting their turn. Kallo too waited for her turn to grind wheat. But by the time it was Kallo’s turn, the sun had set and it had already become dark.

The miller went to sleep after pouring the wheat into the milestone. Kallo was left alone, with a small oil lamp. Around midnight, Kallo heard footsteps approaching the mill. When she turned around, Kallo found goblins sneaking into the mill. It was a whole gang of goblins! “We’ll eat you! We’ll eat Kallo!” the goblins shrieked, running around her in a circle.

“Shoes, shoes, shoes,” they mumbled as they searched for the shoes. They came back with a pretty pair of shoes. “Now then, we shall eat Kallo,” the goblins sang. “No, not like this, Kallo does not have a coat,” Kallo sighed. When the goblins brought  Kallo a fur coat, she asked for a pair of gloves, then for an umbrella and so on. The clever girl made the goblins run for different things the whole night.

The clever girl made the goblins run for different things the whole night. When the daylight came, and the cries of roosters filled the air, the goblins ran into hiding. They could not survive in the daylight. Soon the miller woke up and began grinding Kallo’s share of wheat. In the meantime, Kallo loaded her donkey with the things the goblins had brought her.

In the meantime, Kallo loaded her donkey with the things the goblins had brought her. Kallo’s mother was surprised when she saw the things her younger daughter had brought in. “What is all this?” her mother asked. “The goblins in the mill gave them to me,” she replied.

Marbo became jealous of her sister yet again. As a result, Marbo wasted all the flour Kallo had brought home. Now, on New Year’s day, the mother found no flour. Marbo was sent to get the flour from the mill. Unfortunately, Marbo gained nothing.

Marbo’s jealousy had taken Marbo to the mill, but she did not have Kallo’s wits. The goblins scratched Marbo’s face and tried to eat her. Marbo screamed out in pain. Luckily, the miller heard Marbo’s cries and came to her rescue. Also read, The Brave Little Tailor Story.

In the end, Marbo’s face was treated with the face powder Kallo had received from the goblins. And Marbo learnt her lesson. When Kallo observed Marbo’s sadness, she spilt half of her gifts with Marbo. Since that day, the mother and the two sisters lived happily ever after.