King Midas And The Golden Touch

This is an amazing short bedtime story for kids, King Midas And The Golden Touch. Once there lived a king named Midas. He had a large kingdom. He had many palaces. But still, he was not happy. He wanted to have more gold as he was greedy. One day as he was praying, a holy man appeared. King Midas asked, “Grant me a boon, Holy Man! Whatever I touch should turn into gold!”  The holy man said, “Son, your wish is granted.” The King became very happy.

He touched his throne and it changed into gold. He touched the chairs, tables, vases, and statues and all of them turned into gold. King Midas was happy beyond words. He thought he was the richest man in the world. Happily, he then ordered his dinner. As soon as he touched it, it turned into gold. The king was astonished. He could not eat or drink anything. 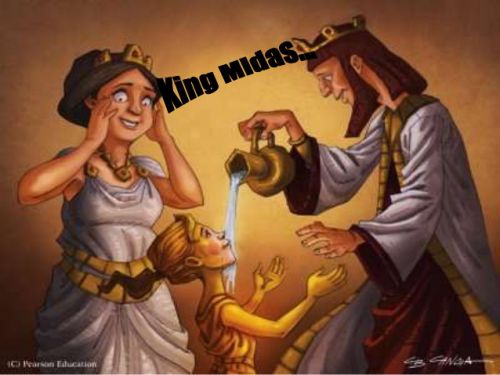 Suddenly, his daughter rushed in. As he put his arms around her, his daughter too changed into a statue of gold. King Midas was shocked.

“Oh no! I do not want any more gold. I want my dear daughter back. Holy man, take back your boon, I beg of you.” he cried. The holy man appeared and gives him a bottle of water and said, “Sprinkle this water on all the things that have been changed into gold.”

When King Midas sprinkled the water, all the things came into their original form. King Midas was very happy now. He had learned a lesson,  “Gold does not give the happiness.”

Don’t forget to check out the printable version of “King Midas And The Golden Touch” on Pinterest from here.