Kumba Am And Kumba Amul

For most days, Kumba Am played while Kumba Amul did chores. One morning after Kumba Amul had washed all of the utensils, her stepmother called out angrily. “The calabash bowl is still dirty! Take it and go to scrub it in the sea of Daayaan.” Kumba Amul didn’t know how to find the Sea. But she didn’t dare to question her step-mother. She picked up the calabash and left the compound. Also, read Swan Lake Story. 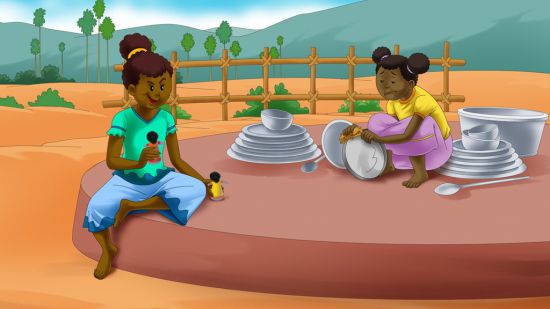 Image Source@ www.istorybooks.co. Kumba Amul crossed forests, hills, and streams. At sunset, she came upon a baobab tree shaking down its own fruits! She reached to grab some, then pulled her hand back, remembering it was rude to take them without being offered. “Where are you going my child?” asked the enchanted baobab tree. “To the Sea of Daayaan to wash this Calabash,” she politely replied. “Take these fruits with you and go in peace,” responded the tree. Kumba Amul thanked the tree and chewed the fruits heartily.

They last until the second day when she came across another curious sight. Over a fire, a cooking pot was filling itself with vegetables! Surprised at the sight of the pot stirring its own stew, Kumba Amul nearly forgot her manners. She quickly greeted the pot and the pot greeted her in return. “For your kindness,” said the cooking pot, “please taste some of my stew!”

At the end of the third day, Kumba Amul came across a woman who had only one eye and one tooth. “I’m very lonely,” said the woman, “please come, hear my stories and spend the night with me.” Kumba Amul respected her elders and followed the lady. After a night of stories and restful sleep, Kumba Amul was ready to go on her way. “But since the woman showed kindness, I’ll do her favors in return.” She swept the courtyard and filled the old woman’s water jars.

Kumba Amul took the eggs carefully so she could remember which was which. As she entered the forest, she broke the first egg. At once, an army on horseback stampeded out and gathered around her protectively. You may also like to read, The Wise Little Girl.

When she reached the middle of the forest, Kumba Amul broke the second egg. Out came hyenas, lions, and pythons! She opened her mouth to scream, but the army chased the wild beasts away before she uttered a sound. Finally, she reached the other end of the forest. She broke the third egg. Merchants, musicians, and storytellers sang drum songs and presented her with bags of gold and fine clothes.

On their arrival at the village, everyone came out to meet Kumba Amul. “Look at all your sister has earned,” snapped theikr mother. “Kumba Am, you must also go and wash a calabash in the Sea of Daayaan!” Kumba Am clutched the calabash and ran out of the village.

She soon passed the baobab tree that could shake down all its fruits. Without greeting the tree, she swiped as many fruits as she could carry. Later, Kumba Am came upon the magic cooking pot. Without asking, she grabbed the stirring spoon and slurped up all of the stew.

At the edge of the forest, Kumba Am picked the largest egg and broke it. Out came wild beasts! Kumba Am dropped the calabash and ran never to be seen again. That afternoon, the vulture snatched up the clean calabash bowl and dropped it in front of Kumba Am’s mother. Her mother cried. She knew her daughter’s bad manners were learned from her own cruel treatment of Kumba Amul who was now married and gone.

In her new house, Kumba Amul welcomed many children and step-children, whom she brought up to  be well-mannered and kind. She loved each and every one of them with all of her heart and they all loved her back even more. Also, read Heidi.

Here is a short visual depiction of one of the fairy tale for kids “Kumba Am And Kumba Amul”. See the video story below,