This is Lambert The Sheepish Lion Story. One night a delivery stork was delivering a package. But he makes a mighty big mistake when he runs into a tree sleepily.

“Such a hard day,” he says trying wake himself up. He opens the piece the bag he was carrying and out came many little lambs. “Go, pick anyone of them,” the stork says pointing towards the sheep, “whichever you pick, will be your mother”. And so the little labs run and choose and mother, all but one. The poor sheep sniffs and sits in a corner. You may also like to read, The Lion King. 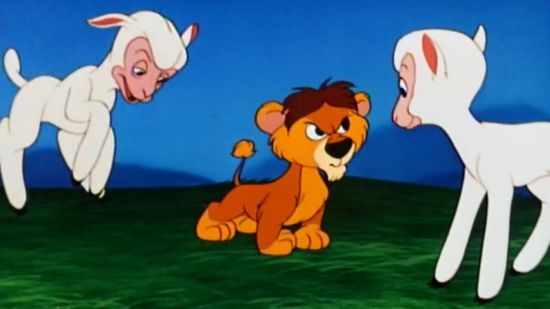 Image Source–> mubi.com. The stork then realizes there has been a mistake as among the lambs was a lion cub.While the baffled stork check and re-check his papers, the lion runs off to the lamb sitting in the corner. The lion cub snuggles and becomes comfortable. And the sheep, too, is happy to have finally had a child. “Lambert?” the stork finds the lion cub’s name in his notebook. “Lambert is not a sheep, he is a lion. Let’s see, he is from south Africa. I shall take him away”. And so, the stork picked the cub away and told the sheep that Lambert had to be shipped back. But, the sheep did not allow so.

But, the sheep did not allow so. In the end, the stork flew away leaving Lambert in the sheep’s care. Next day, when the sun rose, all the little lambs were cleaned by their mothers before they ran off to play. And little lambert couldn’t wait to join them. Soon enough Lambert’s mother let him go. But poor little Lambert felt out of place, he would, after all, he was a lion’s cub.

All the little lambs brayed and bleated, but poor Lambert, no matter how many times he tried, just couldn’t. All the other lambs laughed at him and said. “You don’t belong here. Your ears are too big and so are your feet, your tail is too long as well. You can’t bray or bleat”. The poor little lion cub tried every day without fail to be counted in. He even went head to head with a lamb, but he lost miserably while all the other lambs laughed when poor Lambert fell onto the ground.He tried and tried, but in the end, lambert only got bullied and so he hid behind his mother. Also, read Lady And The Tramp.

Soon fall came, and as with time everything changes, these lambs grew up to be sheep making their mothers proud. And Lambert’s mother, in particular, was the proudest as Lambert was the biggest of them all. But him being big did not change anything for the other lambs. They still bullied the poor Lambert, who only gave them a sheepish grin.

Then one night, when all the sheep slept peacefully, a strange sound woke Lambert. Lambert saw a wolf and saw him howl with all his might. The wolf had found their flock and the wolf was going to eat them. Scared, Lambert hid behind his mother, which led her to be dragged away by the hungry wolf. “Lambert, Lambert” she brayed for help. But poor Lambert did not know what to do.

He looked around for help, but all the other sheep had run away. Lambert saw his mother run away from the wolf. The sheep ran as fast as she could, but soon she was cornered at the tip of the rock. The wolf was soon closing in on her, it only then when something inside of Lambert snapped. And he roared. He roared making the wolf shake, making the earth shake.

The wolf cowered behind the sheep, but Lambert did not stop. He roared and kept roaring, and then he pushed the wolf off the rock with the help of his head. And  Lambert’s mother’s pride could not be compared after that. Her son was a lion! All the sheep too changed their behavior after his display of bravery. And since the Lambert The Sheepish Lion lived happily with them. You may also like to read, Disney Bambi Story.

Here is a short visual depiction of the “Lambert the Sheepish Lion”. See the video story below,