The Lazy Boy That Became A Cow

This is one of the best bedtime stories with morals for kids. Long, long ago, there lived a very lazy boy. Other people worked hard, but this boy only slept. One day, the mother scolded the boy and said, “Oh, you’re always sleeping. You have to work like others.” The lazy boy did not want to be scolded so he went outside.

“What’s the use of working? It’s better to sleep all the time. That cow is just eating grass in the shade. I wish I was a cow,” he thought to himself. Just then, an old man was passing by and gave the boy a strange mask when he heard the boy talking. He said, “You can become a cow if you wear this mask.” “What? I can become a cow?” wondered the little boy. “Well, try it on,” the old man said. The lazy boy immediately put the mask. 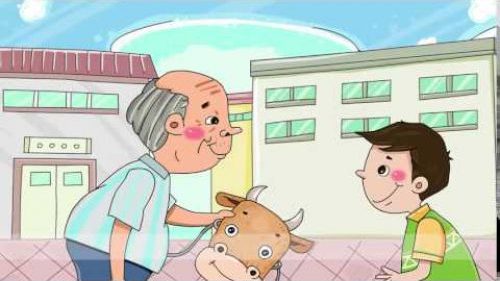 Just then, surprisingly, he really did become a cow. “This is amazing. I can’t believe I’m a cow. Now I can sleep and eat all the time,” the lazy boy said happily. The old man became the cow’s master and so sold the cow to another farmer. The old man told the boy in the beginning not to eat radish or else the one who was wearing the mask would die.

In the meanwhile, the farmer whipped the cow and took it to the field. The lazy boy was surprised and yelled, “I’m not a cow. I’m a human.” The boy’s words only sounded like a cow mooing. The lazy boy was brought out to the field and worked all day long. The boy finally realized his mistake and thought, “I was foolish. I should have listened to mother and worked hard. “The lazy boy regretted his bad behavior and cried.

His master always used to force him to carry heavy loads. The lazy boy walked to the radish field and ate a radish  because he did not want to live like this. What do you think happened next? Unlike what the old man said, there was a BANG sound when the boy took a bite and he became a human again.

The lazy boy jumped with joy. “I won’t be lazy anymore and I’ll work hard.” From then on, the lazy boy worked harder than anyone else. His mother and the little boy stay happily ever after. At last, he was no longer a lazy boy.

MORAL: ALWAYS WORK HARD AND BE NICE TO OTHERS.

Here is a visual depiction of one of the best bedtime stories with morals for kids, “The Lazy Boy That Became A Cow”. See the video story below,

Tagged with: bedtime stories with morals