Little Boy With A Slingshot

This is a great 5 min bedtime story for children. A long, long time ago, there lived a brother and a sister. In their summer holidays, Sammy and Marie visited their grandparents at their farm. Sammy took his slingshot to play in the woods. He practiced hard for many days but all his efforts were in vain. No matter how much he tried,  he could never hit the target.

At lunchtime, grandma called out, “Sammy, it’s lunchtime!” Getting a little discouraged, he headed back for the lunch. While walking back, Sammy noticed his Grandma’s pet. It was a cute, little duck. Out of excitement he took his slingshot and aimed at the duck. This time, his shot hit the target and it hit the poor duck on its head and killed it. He was shocked and scared at the same time. Also, read The Giant Who Shrank. 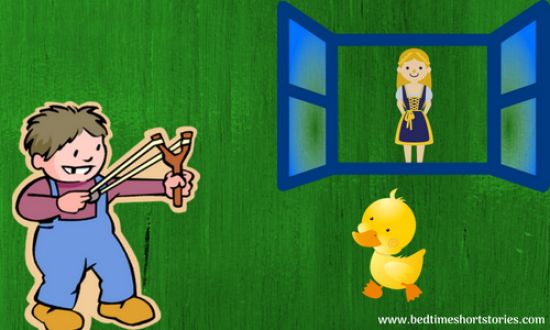 In extreme fright, he hid the dead duck in the pile of woods. Marie, his younger sister had seen it all from the window but she decided not to confront him.

The next day Grandma said, “Marie, let’s wash the dishes.” To this, Marie immediately said, “But Grandma, Sammy told me he wanted to help you in the chores.” As soon as she said this, she turned to Sammy and whispered, “Remember the duck?” Sammy got anxious knowing that his sister knew his secret about the duck. If he would not obey her, she would tell the grandparents about it. So without uttering a single word, he did the dishes. You may also like to read, My Busy Body.

Later, in the evening,  Grandpa asked if the children wanted to go fishing. On hearing this, Grandma said, “I am sorry but I need Marie to stay with me and help make a supper.” Marie turned to Grandma and said, “Well, that’s all right. Sammy told me he wanted to help you.” She again whispered to Sammy, “Remember the duck?” So Marie went with his grandfather fishing and poor Sammy had to stay with his Grandma.

After a few days of Marie taking advantage of Sammy, he finally could not stand it any longer. He came to Grandma and confessed that he had killed their pet, duck. Grandma knelt down smiling, gave him a hug, and said, “My dear child, I know. I was standing right near the window when it all happened. But because I love you, I forgave you. I was wondering how long you would let Marie take advantage of you.” Also, read The Most Beautiful Woman In The World.

Sammy apologized to his grandma and hugged her once again. Sammy and Marie had wonderful summer holidays and both of them learned a lot from this trip.