This is one of the best Panchatantra stories in English with moral for children. Deep in the jungle lived a Lion King with his family, his wife and his cute little son. Daddy lion was very fond of his son. He hoped that one day, his son would take over the King of the jungle. “Son, an important thing for a good King is his roar. You must learn how to roar,” daddy lion said. “But I don’t know how to roar,” said his son. “Try, my son, try,” daddy lion commanded.

But every time baby lion tried, all he could do was “MEOW!” So, the Lion King decided to get his son a teacher who could teach him how to roar. Also, read The Lion’s Axe. 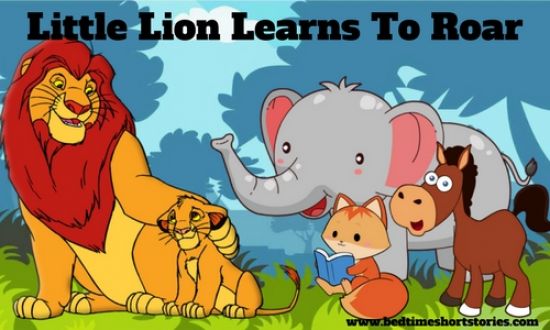 The first teacher was Uncle Elephant. He tried teaching him how to trumpet. Baby lion picked up well. But daddy lion was not happy to see his son trumpeting like an elephant. So, he sent Uncle Elephant away.

Then, he called up Uncle Donkey. He taught him how to bray but daddy lion hated to see his son bray. Soon, Uncle Donkey had also turned away. Now, it was Aunt Cat’s turn. Aunt found that baby lion could already say Meow very well and she went away, too. Daddy lion became sad. He gave up all hopes of his son’s roaring.

Then, one day, a hunter came to the forest. Seeing his animal friends running for their lives, baby lion became very upset. “I will save you all. After all, I am the future King!” he shouted. Saying that he gathered all his strength to roar. The roar was so loud that he scared the hunter away. Daddy lion felt very happy and he was proud of his son. Finally, his son learned how to roar. You may also like to read, The Lion, The Mouse, And The Cat.

MORAL OF STORY: PERSEVERANCE AND BELIEVING IN ONESELF HELPS IN ACHIEVING ONE’S DREAMS.