This is one of the best adventure stories for kids. Little Toy Train was a goods train. He had a shiny engine, three wagons, a cool van, and a bright red guard’s van. Whenever he sped around his track in one corner of the playroom, he called out gaily, “CHUG-CHUG!” His bell tinkled merrily as he raced over the familiar route.

First, there was the tiny village with its stations and shops, its houses and trees and church. Then, there was a high hill that he chugged up ever so slowly but whizzed down, lickety-split! Next was the long, dark mountain tunnel and the bridge which spanned the glassy blue lake. And he was back at the village station. Also, read Treasure Island. 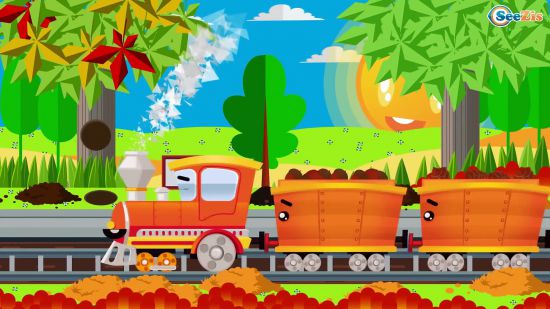 Image Source@ mytoyandgames.com. One day, after many trips around the track, Little Toy Train said sadly, “It’s always the same! Every time I chug up the hill, I whizz down it. Every time I whizz down the hill, I go through the tunnel. Every time I come out of the tunnel, I cross the bridge. Then, I’m here again at the station. I wish I could do something different just once!” His wish did not come true, at least not then.

One night, however, when everything was quiet, Little Toy Train discovered that someone had taken him off his track and had forgotten to put him back. Moonlight glistened through the windows, so he could see his village but he didn’t know how to get there. He tried to move. “CHUG-CHUG!” he said slowly and then faster. Little Toy Train began to move. His silvery wheels went round and round. His headlight blinked on and off like a firefly. His bell tinkled merrily. “I can move without track!” he said happily. “Now, I can do something different.” “CHUG-CHUG!” he said as he went under the wheels of a tricycle.

Suddenly, his light went off and bumped into something soft. “Ouch, Do look where you’re going, Little Toy Train,” someone cried. Little Toy Train’s headlight blinked on again. He saw that he had bumped into Teddy Bear. “I’m sorry!” he said. “My light doesn’t work well when I’m off my track doing something different. Please excuse me!” “That’s alright,” said Teddy Bear as he was not really hurt. Also, read The Adventures Of Brave Eagle.

Little Toy Train chugged along in front of Teddy Bear and the other toys sitting beside him- Baby Doll, Rocking Horse, Furry Kitten, Cowboy and Cuddly Dog. They all smiled at him. “You seem to be having lots of fun, Little Toy Train,” said Cowboy. “Indeed, I’m doing something different,” he answered. “How about giving me a ride?” asked Cowboy. “I’ll sit on top of your guard’s van and pretend I’m riding a horse.” “Alright,” said Little Toy Train.

With Cowboy on his guard’s van, Little Toy Train raced across the floor. Suddenly, there was a big round object in front of him- a red rubber ball. He knew he would never be able to stop in time to avoid an accident. But when he crashed into the ball, a very funny thing happened. The ball just rolled away. It was so funny that Little Toy Train did it again and again. “This is more fun than horse-riding!” exclaimed Cowboy. When Little Toy Train rammed into the ball again, Cowboy laughed so much that he fell off the van. He decided that he had had enough riding, so Little Toy Train went on alone.

He chugged past some toy soldiers and a drum, past a doll’s house and an airplane. He was enjoying himself so much that he didn’t realize that his headlight was out again. He didn’t realize until he discovered he could see nothing at all. Even the moonlight was gone. He had zoomed into a toy tent. “I’m lost,” he said. He went round and round trying to find a way out but without a light, it was impossible to see anything.

Suddenly, someone rubbed against him. It frightened him. He asked for help. “Don’t be scared, Little Toy Train. I’m Furry Kitten. With my green eyes, I can see in the dark. I’ll help you! Let me hook my tail into your bumper, and I’ll pull you out.” And sure enough, Furry Kitten did that. He pulled Little Toy Train back to the very spot where his night’s adventure had started.

Later that day, after someone had put him back, Little Toy Train again chugged up and down the hill, through the tunnel, across the bridge, and through the village to the station. Now his bell tinkled more merrily and his “CHUG-CHUG!” sounded happier than it ever had before. Little Toy Train’s wish had come true- he had done something different! Also, read The Boy In The Paper Boat.

Here is a visual depiction of one of the best adventure stories for kids, “Little Toy Train Story”. See the video story below,