This is the Mary Poppins Story. It was morning on Cherry Tree Lane. Miss Lark, in the biggest house of the Lane, had sent her dog Andrew out for his morning stroll. But in the nursery of Number Seventeen Cherry Tree Lane, Jane and Michael Banks were still in bed. “Up, up!” said Miss Poppins, “We’ll have no lounging about on a super-cali-fragi-listic day.” “Super-cali-what, Miss Poppins?” asked Michael. You may also like to read, The Ora Woman In The Woods.

“Close your mouth, Michael. We’re not codfish. If you can’t think of a word that says just what you want to say, try super-cali-fragi-listic. And it just describes today.” That got Jane and Michael up and dressed in record time. “Out to the park we go,” said Miss Poppins. “Spit-spot this way!” 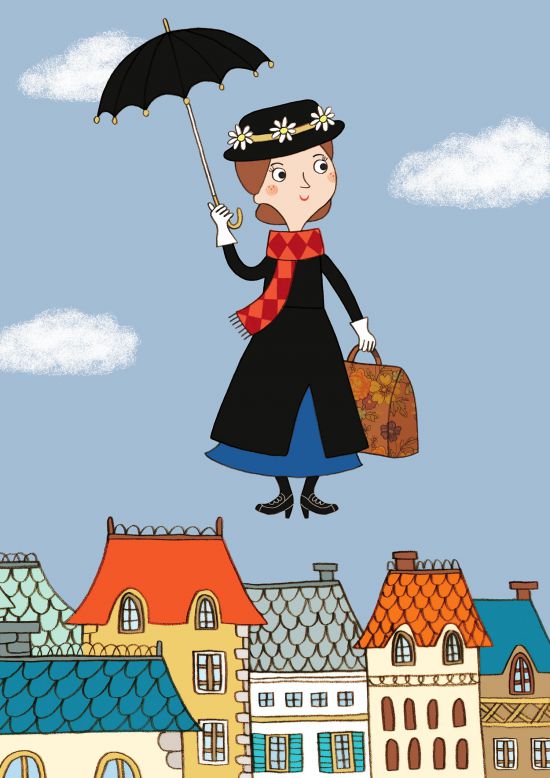 She led them at a brisk pace down narrow, twisting streets they had never seen before until at the door of a small house she stopped. Rap, rap went the parrot’s head handle of Miss Poppin’s umbrellas. The door was opened by Mary’s friend, Bert. “How’s he?” Mary asked. Bert shook his head. “Never seen him like this!” he said. “And that’s the truth.”

“Bless, bless my soul,” gurgled a voice rich with chuckles. “Is that Mary Poppins? I’m delighted to see you, my dear.” Jane and Michael looked about. They could see no one in the room until Mary spoke. “Uncle Albert, you promised not to go floating around again,” she said. And she seemed to be speaking to the ceiling. Jane and Michael looked up. There in the air sat Miss Poppin’s Uncle Albert, chuckling merrily.

“I know, my dear,” said Uncle Albert, wiping a merry eye. “I tried but I do so enjoy laughing. And the moment I start hee-hee, it’s all up to me.” To the children, he whispered, “It’s laughing that does it.” The children began laughing and so did Bert. Soon, they were simply flying with laughter. It bubbled out but still, they felt lighter and lighter until their feet left the floor and up they floated till their heads bumped the ceiling.

“I must say you’re a sight, the lot of you,” said Mary Poppins, her arms folded in a way that Jane and Michael knew meant that she disapproved. When Bert told Uncle Albert a joke, all four of them roared so with laughter that they turned somersaults in the air. But she looked stern. “Most disgraceful thing I’ve ever seen,” she snapped, “or my name isn’t Mary Poppins.”

“Speaking of names,” said Bert, “I know a man with a wooden leg named Smith.” “Really?” chortled Uncle Albert. “What’s the name of his one leg?” And again the room was shaking with laughter. “Now then, Jane, Michael, it’s time for tea,” said Mary from below.

“Oh, please stay!” begged Uncle Albert. He waved at the table on the floor. “I have a splendid tea waiting for us- if you could manage to get the table to you!” With a rattle and bump, the table began to jerk. Then up it rose through the air, cups, cakes teapot and all. “Oh, splendid! Thank you, my dear!” said Uncle Albert. “Next thing, I suppose you’ll wanting me to pour,” said Mary with a sigh. And up she floated, neat as you please, without so much as a smile. Uncle Albert thanked her once again and wished that he should stay up here with everyone. Also, read The Goose Girl.

Soon, Michael asked the way to get down. To this, Uncle Albert told him to think about something sad and he would simply come down. “Time to go home,” Mary’s voice crisped and firm, cut sharply through the laughter. And suddenly, at the sad thought, down came Jane and Michael, Uncle Albert and Bert bump on the floor.

“Goodbye!” said Michael, “We’ll be back soon.” “And thank you,” said Jane soberly. “We’ve had a lovely time.” Back home, Jane and Michael tried to tell their father about their adventure. “We floated in the air and had tea on the ceiling,” Jane began. “And there was a man with a wooden leg named Smith,” Michael broke in. “Poppins!” cried Mr. Banks. “What is the meaning of this?”

“Children will be children,” sniffed Mary Poppins. “And these two are up past bedtime. Spit-spot.” Michael and Jane just looked at each other. “Anyway,” said Jane, kicking off a slipper, “It was a super-cali-fragi-listic day.”

Here is a visual depiction of, Mary Poppins Story. See the video story below,