This is one of the best panchatantra stories for kids. Once upon a time, there was a wealthy merchant named Naduk. Naduk however, suffered a heavy loss in his business and lost a lot of money. He decided to move to another town and try his luck there. Before leaving, Naduk went to meet his friend Laxman. He wanted to leave an iron beam with Laxman as transporting the beam to another town would be very difficult. “My dear friend, your beam would be safe with me and you may take it whenever you want!” said Laxman, Naduk thanked Laxman for his kindness and left. Read more such panchatantra tales here.

A few years went by and Naduk’s business flourished. He grew wealthy once again and decided to move back to his old town. He bought a huge mansion there and hired several servants to take care of his house. After a few days, Naduk decided to go and meet Laxman. Laxman was very glad to see his friend. He was also happy about Naduk’s successful business. The two chatted for quite a while about various affairs. Also read, The Blue Jackal. 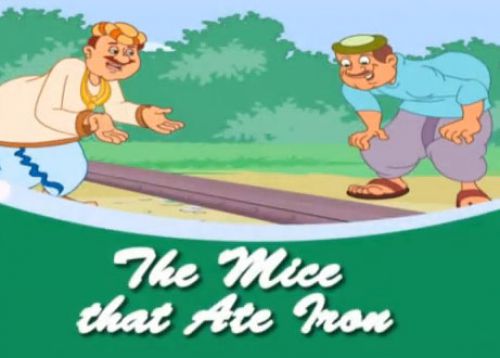 Finally, before leaving, Naduk asked Laxman, “Before leaving, I had given you an iron beam. Now, when I am back, may I have it?” On hearing this, Laxman turned red and looked very worried. He had planned to sell the beam as it would fetch a good price in the market. Laxman said, “I have had some mice in the basement this year. It’s very unfortunate but these mice ate your iron beam until it was all gone.”

On hearing this, Naduk was not convinced. But, he said to Laxman, “I am sorry to hear that! Anyway, will you please send your son, Ramu home with me? I would like him to collect the present that I have brought for him.” Naduk took Ramu with him and locked him at the  basement of his house. Here’s another panchatantra stories in english you may like, The Singing Donkey.

After a few hours, Laxman grew worried that his son had not yet returned. He too went to Naduk’s house. “Where is my son?” asked Laxman. “On the way, a hawk carried him off,” said Naduk. The two got into a fierce argument. Since Laxman said it was impossible for a hawk to carry off his son.

Eventually, they went to the local magistrate. The magistrate too said that it was impossible for a hawk to carry off a young boy. Clever Naduk then said, “If the mice in Laxman’s house can eat away my iron beam, of course, a hawk can carry his son!” On hearing this, the magistrate demanded the whole story. He finally ordered Laxman to return the iron beam and Naduk to return Laxman’s son.

Laxman apologised to Naduk for trying to trick him and the two soon became friends once again!

Here is a visual depiction of one of the best panchatantra stories for kids, “Mice That Ate Iron”. See the video story below,