Monkey And The Cap Seller Story

This is the Monkey And The Cap Seller Story for kids. Once in a small town, there lived a man who used to sell caps.  The cap seller used to sell caps in all the nearby towns and villages. One day, as usual, he was starting with his business. He decided to go to the next village. He was going to sell his caps in the village market. Also read, The Clever Monkey Story.

“Caps, caps, caps! Five rupees caps, ten rupees caps!” said the cap seller loudly. He was going through a forest carrying a basket of colorful caps in his hands. He got tired in the heat of the sun and thought of lying down under a tree for some time as he had walked a long distance. Putting his basket on the ground, he thought to himself, “I am so tired! Let me take a small nap.” 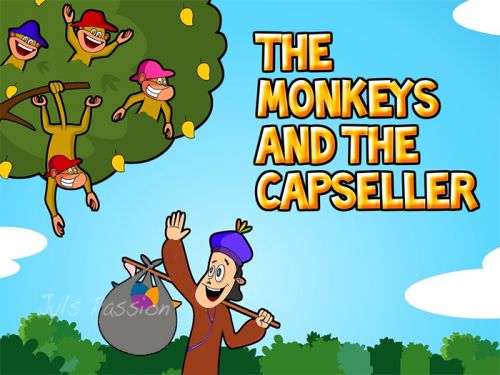 There were many monkeys on that tree. Slowly from one of the branches, a monkey peeped out. All of them were very naughty. One of them came down and on seeing the caps it whistled. All the other monkeys responded to his whistle. One by one he took all the caps from the cap seller’s basket. Everyone wore the caps and were playing merrily. Also, read Monkey And Crocodile Story.

When the cap seller woke up, he was shocked to see his basket empty. He searched for his caps everywhere. To his surprise, he saw the monkeys wearing them. He found that the monkeys were imitating him. So, he started throwing his cap down and the monkeys repeated the same. The cap seller quickly collected all the caps, put them back in his basket and went away happily.

Here is a visual depiction of this amazing short story, “Monkey And The Cap Seller Story”. See the video story below,