This is Mulan Disney Princess Story.  Thousands of years ago in ancient China, there lived a beautiful young woman named Mulan. She lived with her parents and a dog named Little Brother. Mulan’s father had once been a great warrior, but his leg had been injured in battle. As an only child, Mulan felt responsible for upholding the family honor.

One day, a man arrived with terrible news from the Emperor. The Huns, China’s enemy, had invaded. The Emperor had ordered that one man from every family must join the Imperial Army. Mulan’s aged father had to fight again. Mulan knew her father was too old to fight. You may also like –> Princess Belle Short Story 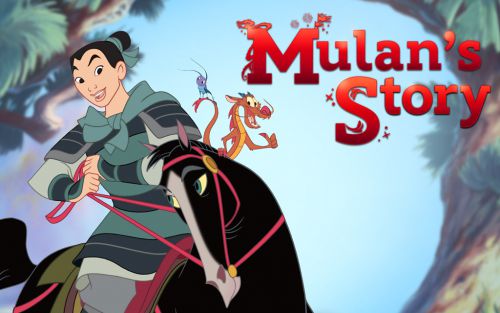 Later that night, she made a big decision. After saying a prayer to the Ancestors, she used a sword to cut her hair short. Then she put on her father’s warrior clothes. As her parents slept, Mulan, now dressed as a young man, jumped onto her father’s horse, Khan. Then she raced off to join the Imperial Army in her father’s place. Somehow, she would find a way to bring honor to her family.

When Mulan arrived at the Imperial Army’s training camp, she met Captain Li Shang. “What is your name?” he asked Mulan. “My name is Ping!” she said. To her amazement, Shang and other soldiers believed she was a man. Shang worked hard to teach his soldiers strength and discipline. Mulan struggled to keep up. Frustrated, Shang told her to go home. But to earn the soldier’s respect, Mulan retrieved an arrow atop a top pole. This was the hardest training task of all, and Mulan had done it!

Mulan was not alone on her journey. A dragon named Mushu, sent from the Ancestors to be her guardian, and a cricket named Cri-kee were always at her side. Working together, they wrote a fake letter ordering Shang and his soldiers to go after the Huns. Now Mulan would get her chance to bring her honor to her family. Heeding the letter’s message, Shang led his soldiers into the mountains.

Suddenly, they were surrounded by thousands of Huns. Mulan got an idea. She grabbed the very last cannon and, using Mushu’s flame, lit the fuse. The cannon caused a massive avalanche of snow to fall on the Huns. But the danger was not over. Snow was now racing toward Mulan and her friends. Mulan’s loyal horse, Khan, ran to her side. She jumped onto his back, and just as the snow was about to bury Shang. Mulan pulled him to safety.

During the battle, Mulan had been injured. While caring for her wound, a medic realized that “Ping” was a woman. Shang had no choice but to leave Mulan behind. As she sat with Khan, Mushu and Cri-kee, Mulan felt that she had failed her family and herself. Then she heard the Hun’s voices.

Mulan raced to the Imperial City to warn Shang. “The Hun’s are alive! They are in the city,” she told Shang. But Shang felt betrayed by Mulan and didn’t trust her. Mulan tried warning the others, but no one would believe her. The Hun’s leader, Shan-Yu, kidnapped the Emperor, but Mulan and Shang rescued him. Furious, Shan-Yu chased Mulan onto the palace roof, exactly as she planned.

Mulan grabbed Shan-Yu’s sword and pinned his coat to the roof. He couldn’t move when Mushu and Cri-kee shot a rocket his way. The force of the explosion sent Mushu and Cri-kee flying through the air. Mulan and Shang felt together to the ground as fireworks began to fill the sky. The people were celebrating. The Huns had been banished and the Imperial City was safe!

The Emperor was very grateful to Mulan. “You have saved us all,” he said and then he did something extraordinary: The Emperor bowed to Mulan. Everyone in the plaza bowed to Mulan too. The Emperor asked her to stay on as his adviser, but Mulan knew it was time to return to her family.

At home, Milan presented her father with a sword given to her by the Emperor. “The greatest gift and honor is having you for a daughter! I’ve missed you so much!” said her father. “Excuse me,” said a voice behind them. “Does Mulan live here?” Shang had brought Mulan her helmet and she invited him to stay for dinner.

Here is a short visual depiction of, “Mulan Disney Princess Story“. Watch the video story below,