My Shadow poem awesomely depicts the relationship between a child and his shadow.  Within the poem, you can see how curious a child has become after seeing his own shadow. The poem is written by Robert Louis Stevenson.   It was originally published in the year 1885.

Here you go. Happy reading! You may also like to read, The Brave Little Kite. 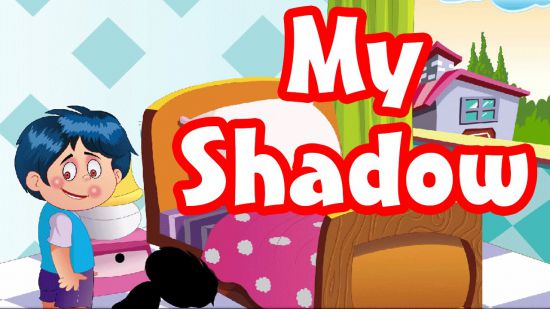 I have a little shadow that goes in and out with me,
And what can be the use of him is more than I can see.
He is very, very like me from the heels up to the head;
And I see him jump before me when I jump into my bed.

The funniest things about him is the way he likes to grow-
Not at all like proper children, which is always very slow;
For he sometimes shoots up taller like an India rubber ball,
And he sometimes gets so little that there’s none of him at all.

He hasn’t got a notion of how children ought to play,
And can only make a fool of me in every sort of way.
He stays so close beside me, he’s a coward you can see;
I’d think shame to stick to nursie as that shadow sticks to me!

One morning, very early, before the sun was up,
I rose and found the shining dew on every buttercup;
But my lazy little shadow, like an arrant sleepy-head,
Had stayed at home behind me and was fast asleep in bed.

Summary Of My Shadow:

In this poem, a kid is describing his shadow. He is amazed to see wherever he goes, his shadow follows him. He thinks that the shadow is of no use to him except for it visibility to him. From head to heels, the shadow is same like him. The shadow of his jumps before him when he jumps from his bed.

One morning, when the boy gets up early in the morning before the sun rises, he sees the beautiful water droplets on the leaves and grass. But his lazy friend, the shadow is too lazy that it keeps on sleeping till the sun rises!

Few phrases to learn after reading the poem:

Heels up to the head: identical in every possible way

India-rubber ball: to show the pace of how the shadow grows fast and becomes small within a period of time

Dew on every buttercup: when the sun rises in the sky, there is dew or water droplets on leaves and grass