This is the Noah Bible Story For Kids. A long time had passed since Adam and Eve were created. The land was now full of wicked people. This made god very unhappy. There was only one good man named Noah. He blessed Noah for being the good person and said, “I will destroy all bad and wicked people. Only you and your family will be saved.” So, he asked Noah to build a huge boat called the Ark. Read the full story of Noah’s Ark and the Flood.

God then said, “Bring your family and two of every kind of family to the Ark.” He also asked him to gather enough food to last for a very long time. He then told him that in seven days, he would send rain which would go on for forty day and forty nights. And therefore, the rain would bring a huge flood. Only Noah and his family and the animals on the boat would survive. 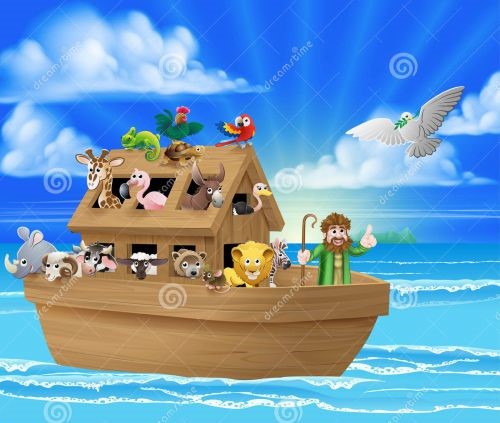 Noah did everything that god had asked him to do. He spent many days building the Ark. He gathered two animals of every kind, gathered food and got inside the Ark with his family. Furthermore, the god sent the rains for forty days and forty nights. Noah and his family were safe inside the Ark. After the rain had stopped, to know what was going outside, Noah would send out a dove every day. But the dove would come back with nothing. Also read, Samson Story For Kids.

One day, the dove came back to him with an olive leaf. Noah knew that the Earth was finally drying out. They stepped out of the boat after a year, very happy to have survived the flood. Most of all, the animals and Noah’s family were saved and very happy to be back at their place. As a result, all the bad and wicked people vanished from the Earth.

Here is a visual depiction of, “Noah Bible Story For Kids”. See the video story below,