This is one of the great Jataka tales for kids. A long time ago, deep in the forest, there lived a large group of monkeys. The monkeys had a King who was big and strong and ruled over them very wisely. The monkeys had discovered a mango tree that grew on the bank of the river. It had big delicious mangoes.

The wise monkey King cautioned all the monkeys saying, “Don’t let a single mango fall into the river. If you do, the river will carry it to places where the humans live and once they get to know about this fruit, then we’ll not be safe here anymore for they will come in search of the fruit and destroy us to keep it for themselves.” So, the monkeys were very careful and they always take care of the mangoes at the edge of the river. You may also like to read, The Foolish Monkey And The King. 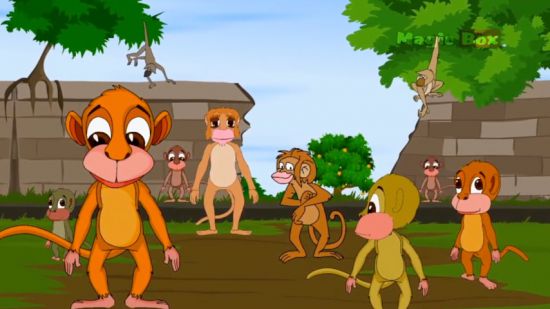 Image Source@ www.youtube.com. One day, a big, ripe, and tasty mango fell into the river without their knowledge. The mango floated on the water and reached the other side of the stream. The Royal washerman was washing clothes. He found the mango. It appeared to be very juicy and sweet. He decided to give the mango to the King. “Your Majesty, I’ve found this ripe, golden mango on the bank of the river in the forest.”

The King ate the mango. It was the sweetest mango he had ever tasted. He wanted to have more of such mangoes. He thought, “The washerman found it floating on the banks of the river. Surely, it must have floated from the other side of the river.” So, he decided to find out the source of the mango. He took some soldiers with him and rode the boat to the other side of the stream. From the boat, they could see the mango tree. The King was very happy. Now, he could enjoy the mangoes.

Seeing him falling into the water, he ordered his soldiers to rescue the Monkey King. The King welcomed Monkey King and said, “I’m much impressed by your sense of responsibility. Your subjects are now all safe on the other side. You’re very tired. I invite you to my palace to spend a few days with me.” “Your Majesty, Thank you for your kind invitation but I can’t come with you. My place is with my subjects. I’ve to stay with them,” said Monkey King. Also, read The Crab And The Monkey.

“You’re really a great King. You know very well the responsibilities of a King towards its subjects. I’m also a King and cannot harm you or your subjects. I had come here to get the golden mangoes. However, now I shall not touch these mangoes. This is your Kingdom. I cannot cause any harm to it. Please continue living here with your subjects,” said the King.

“Thank you so much for sparing my Kingdom and saving my life. I cannot let a friend go away without a gift. Please accept some of these juicy mangoes and take them with you to your palace. Every year, I’ll send some of these sweet mangoes to your palace. It’ll make our friendship everlasting.” The Kingsmen took some mangoes and returned to their palace. The monkeys kept on living in the forest. Also, read The Monkey And The Fisherman.

MORAL: BE KIND TO ALL OTHERS IN THE WORLD.

Here is a visual depiction of one of the best Jataka tales for kids, “Noble Monkey”. See the video story below,