Noddy and the Goblins

This is one of the best kindergarten stories which have been adapted from the original works of Enid Blyton’s Noddy series. On a hot day not far from Toyland in the Goblin Corner, two goblins were just waking up.

Sly and Gobbo, were two extremely notorious goblins. Today, they were feeling very, very lazy and hungry. So, they decide to go to Toyland to eat something. After they yawned loudly and rubbed their eyes to their heart’s content, they start walking to Toyland. 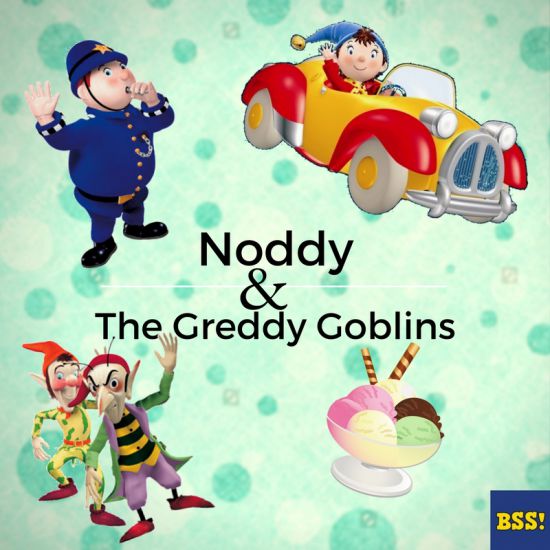 “Come on Sly, let’s hurry up,” says Gobbo, “all this sleeping has made be hungry.”  So, the both of the begin walking to Toyland. Toyland was quite far from Goblin Corner. So, by the time the both of them reached Toyland, they were hungrier than before.

When the two goblins saw Noddy, they had a mischievous idea. “Noddy!” Gobbo exclaims. “Come have ice cream with us. It is hot today, you must be tired driving around in Toyland today,” Gobbo says. “Yes, I am tired,” Noddy says thoughtfully, “It won’t hurt to have an ice cream!” He agrees finally and joins the two. Noddy too orders an enormous ice cream.

While Noddy was eating his ice cream, the goblins chose the opportunity to flee from the ice cream parlor. They knock over their chairs and run across the street, even knocking over Mr. Wobbly Man. “Where have these goblins gone now?” Noddy wonders. You see, Noddy was too busy eating his ice cream to pay any mind to what the goblins were doing. Also, read Noddy Goes To Toyland (Part-1).

Suddenly, Noddy realizes that he’d have to pay for three ice creams instead of one! This makes Noddy extremely angry. While Noddy was paying for the ice creams, the two goblins who had been hiding in the market were deciding how to get back, for they had no money.

Honk, honk! The goblins heard. At once they knew Noddy was nearby. They managed to persuade Noddy to give them a ride back home. “We’ll pay back the money for ice creams. We’ll also pay sixpences for the car ride.”

Noddy reluctantly agreed. So he says, “Sly you sit on the spare tire, at the back.” Then, off they went towards the Goblin Corner. But these wicked goblins had no intentions of paying back the money or for the ride. So, the moment they neared the Goblin corner, Gobbo says, “Oh my! What’s that?”

Noddy becomes terrified and at once applies the brakes. No sooner did Noddy apply the brakes, than the goblins leaped out of his car and ran away. Poor Noddy became sad. “I had to pay for their ice cream from the money I was saving for buying new tires for the car. Now, what am I to do?”

Noddy quickly returns to Toyland and brings back Mr. Plod to the woods where the goblins deceived Noddy. Mr. Plod tries looking for the goblins but could not find them as it had grown dark. So he tells Noddy, “Don’t worry Noddy we’ll find the villainous greedy goblins tomorrow. There is an ice cream eating completion in the city. As greedy as they are, I am sure they won’t miss it for the world!”

The next day, the two wicked goblins make their way into Toyland again. “Be sure not to bump into Mr. Plod. It would lead to a lot of trouble,” Gobbo warns Sly. Soon, they come to the ice cream eating competition. You may also like to read, Noddy In Toyland (Part-2).

Tables were laid with enormous ice creams. All the tables were full of ice creams of many flavors.  Sly and Gobbo’s mouths watered at sight of such ice creams. “Let’s eat!” they said. But before they could begin eating, they heard Mr. Plod yelling, “Not so fast you villains!”

They try to run away, only to run into each and crash into a huge bowl of ice cream! Finally, Mr. Plod catches them and says, “You two will return Noddy’s money, right now! And you two will also pay for his new tires.”

The two goblins have no choice but to comply with the policeman’s orders. “We promise,” cry the two greedy goblins. “I must say,” Mr. Plod says after the goblins promise, “People like you two, who try to deceive other, will always end up in a sticky end!”