This is the short story of Noddy In Toyland. The toy train to Toyland was hooting, signaling to leave. “Hurry up, Noddy,” big ears hurried. Noddy followed quickly. They boarded the train and found space to sit. The toy train was beautifully crafted out of brightly painted wood. The engine was red and the funnel on the engine was blue, with yellow wheels. All the carriages were open and it was crowded. Read more about, Noddy Toyland Adventures!

Big-ears had dragged his red bicycle too. They found a place among two dolls, a toy soldier, and a pink cat. The cat was complaining about Big-Ears stepping on its tail. “Sorry,” Big-ears said to the cat, “Sit down here, Noddy,” he then told Noddy. Poor Noddy was nodding his head again. He blue eyes shone. 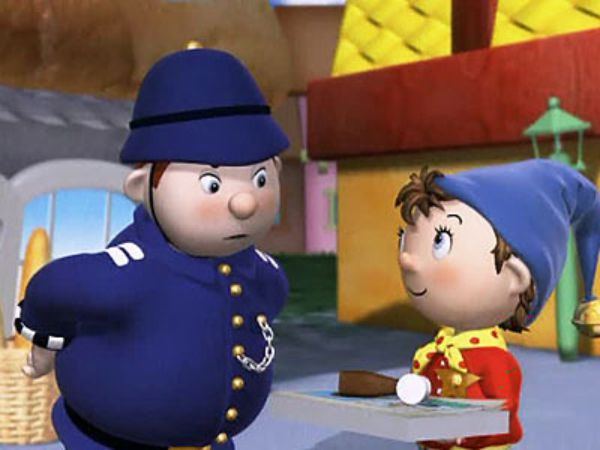 “Why does he keep nodding his head?” asked the toy soldier. “Ask him to stop. Who is he?” “This is Noddy,” Big-Ears told them. “He is going to Toyland. I am not quite sure what he is, but I think he is a toy.” “Oh my! He has forgotten to dress himself,” gushed a doll. Noddy told them that he never dressed up. He did not have any clothes. “I’ve only got my round wooden body,” he said.

Big-Ears told Noddy that they would get him clothes once they reached Toyland. Then the train set off. The engine gave a loud screech and then thundered towards Toyland. All the brightly colored carriages jolted behind it, filled with toys, brownies, and pixies. The toy train passed the Monkey Town. Big-Ears showed it to Noddy. Noddy had not seen so many toy monkeys before in his life.

When the train stopped at the Monkey Town’s Station, two monkeys squashed themselves in the same carriage as Big-Ears and Noddy. “You stepped on my tail!” cried the toy cat once more. “Then keep it out of the way. It is silly to leave it lying about,” said the toy monkey. “Who is he?” the monkey asked pointing at Noddy. “I am Noddy,” Noddy said, nodding his head again.

Big-Ears told Noddy that the next station would be Rocking-Horse Town. He also told Noddy that the rocking-horses never got on the train. Those horses could easily match the speed of the train themselves. “I can see them!” Noddy said excitedly. “I’d like one of those to-and-fro things!” Everyone in the carriage laughed at that. “That’s a new name for them!” Big-Ears laughed.

The train next stopped at the Clockwork-Mouse Town station. The pink cat said that if a mouse got in there carriage, it would give the mouse a hard time. Two mice got in and none of them were in the same carriage as the toy cat. The next station was Toy-Cat Town, the pink toy cat got off the train there. “Goodbye,” called the toy soldier over the train’s noise, “Do not leave your tail lying around.” He said waving at her. Also read, Noddy Goes To Toyland.

Toy Town was a big town. The station was busy with dolls running to catch their trains, toy potters running everywhere and little toy animals got in everyone’s way. The worst one was a huge bouncing ball, it almost knocked Noddy over! “A bouncing ball? It is not supposed to go by train.” Big-Ears said, annoyed. “It can very well bounce for miles if it wants!”

A spinning top was coming their way, Big-Ears warned Noddy about it. But Noddy could not react in time, the spinning top bumped into Noddy and sent him spinning too. Poor Noddy, the whole of Toy Town spun in front of his eyes. Dizzy, he flopped down.

The engine gave a hoot and left the station. When all the noise had settled, Noddy got up and dusted himself. Noddy looked around and then said to Big-Ears, “I wish to have some clothes too. Everyone is dressed so nicely, I feel dreadful. Even the teddy bears have a blue ribbon around their necks!” Big-Ears decided it was time to get Noddy some good clothes. They asked a teddy bear for directions to a shop.

After telling them the way to a nearby shop, the teddy bear added, “If I were you I’d go to the market. It is much cheaper there.” And so, they went to the market. It was a lovely place, buzzing with toys. Toy buses ran through the roads on regular intervals. There were toy bicycles and toy cars everywhere. Noddy was awed. The market had plenty stalls, selling almost everything.

Big-Ears had become quite fond of the little nodding man. He lent some money to Noddy. “What kind of clothes do you want, Noddy?” he asked. When Noddy saw money he asked, “What is money? I really do not know. And how do you get it?” Big-Ears explained that money was something they received after working. 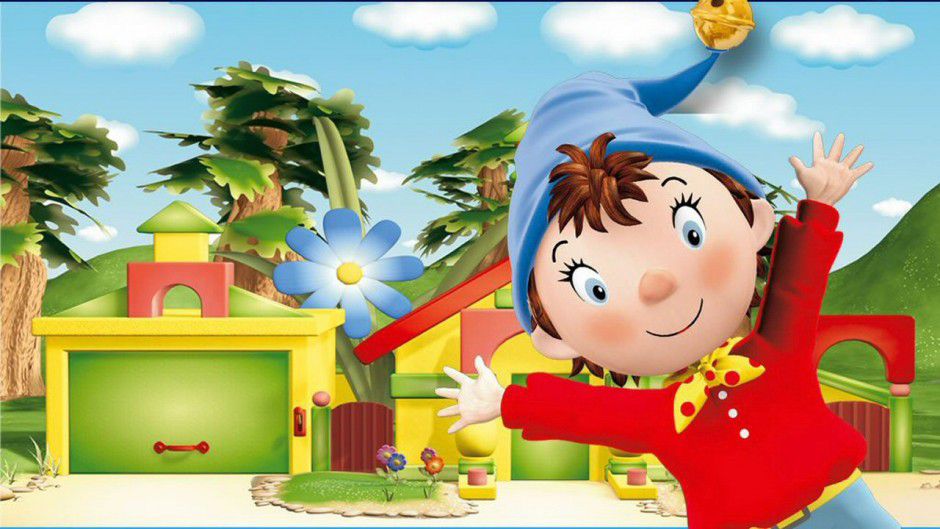 He went on to tell him that they put it in their pockets and buy whatever they need. “You’ll have to work too. Then you can buy heaps of things!” “Oh, I see now.” Noddy said, “I am strong and I can work very hard. I will be able to pay you back soon!”

“I cannot afford a coat, so how about a hat?” he asked. Noddy picked up a doll’s hat, Big-Ears laughed at that. He told Noddy that he could not wear a doll’s hat. Finally, Big-Ears chose a beautiful bright blue colored hat with a jingle bell at its tail. And so, Noddy finally had clothes. He was very happy with his new clothes. Then he asked, “What do we do next?”