The Old Man and the Three Young Men

This is one of the great bedtime moral stories for kids. Once upon a time in a village lived three young men. Now, these three men were extremely lazy. They never did any work and they only lazed around. “Who wants to work, when you can sleep,” one of them said. They would laugh and sleep and be merry all the time. All the other villagers found this very annoying. 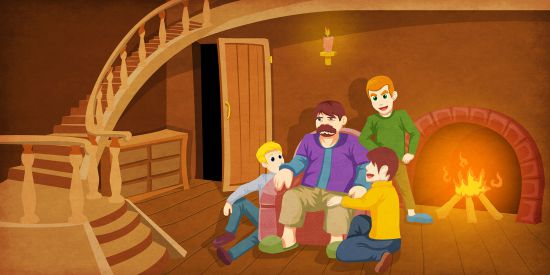 Image Source–> blog.kilafun.com. While they were roaming, they found an old man. The old man was hard at work in his field. This man was extremely old. His graying hair and gray beard were visible from afar. The three lazy men asked the man, “What are you doing there?”

“I am planting some trees that would bear many fruits,” the old man replied. One of the three lazy men asked again, “And why would you do that? You should be resting your old body. After all, you won’t be around here to enjoy these fruits!”

The old man only smiled and chose not to reply. He knew that the three of them were lazy and would not know the pleasure of leaving something behind for the coming generations. “You should stop,” another one said.

“Young men, I may be old and my body as you said, is old too. But you see, I may die soon but these trees that I am planting will bear fruit for longer than my life. And it pleases me to know that there will be many people who enjoy the fruits of a tree that I am planting now!” Also, read The Old Man And His Grandson.

“Even when I die, people will remember me for my good deeds. And how will people remember you, tell me?” the old man said as he went back to work. The three young men went back home, but they did not understand what the old man meant.

MORAL OF THE STORY: GOOD DEEDS ARE REMEMBERED EVEN AFTER DEATH!