The Old Man And His Sons – Aesops Fables

This is one of the many famous Aesops Fables for kids. Once upon a time, there lived a man who had many sons. However, the sons were always fighting with each other. As the man grew old and weak, he became worried that if his sons continued to fight among themselves they would ruin themselves. He begged them to live happily together in peace but no one listened to him and continued to behave the same.

One day, the old man called all his sons together and handed to them a thick bunch of sticks which were tied together. He told them, “I want each one of you to take this bundle of sticks and break it.” The sons one by one took the bundle and tried to break it with all their strength but they were not able to. “Sorry father! We are unable to break this bundle, no matter how hard we try!” said all his sons. 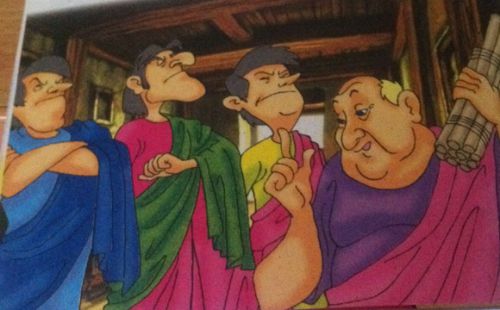 The old man then opened the rope that bound the bundle of stick together. He then gave each one of his sons a stick. He said, “Now my sons, take one stick each and break it!” The single stick broke easily. The sons were puzzled by their father’s behaviour and asked, “What does this mean father?” The old man explained, “Just like these sticks if you will stay together as one bound by brotherly love, nobody will be able to break you. There are many people in this world who will take advantage of you when you are single like this stick. If you will stay united, you can face any danger.” They all learnt a lesson and came to know the value of each other.

Here is a short visual depiction of one of the many famous Aesops Fables for kids, “The Old Man And His Sons“. See the video story below,