This is the Old Sultan Story for kids to read. A farmer once had a faithful dog called Sultan who had grown old and lost all his teeth so that he could no longer bite. One day, the farmer was standing with his wife before the house door and said, “Tomorrow I intend to shoot Old Sultan, he is no longer of any use.”

His wife felt pity for the faithful beast, answered, “He has served us so long and been so faithful that we might well keep him.” “What? You are not sharp. He has not a tooth left in his mouth and no thief is afraid of him; now he may be off. If he has served us, he has had good feeding for it.” said her husband. The poor dog who was lying stretched out in the sun not far off and heard everything and was sorry that tomorrow was to be his last day. 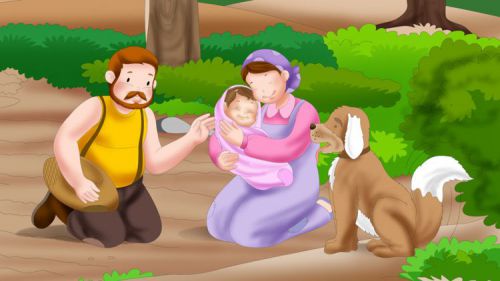 Image Source–> www.istorybooks.co. He had a good friend, the wolf and he crept out in the evening into the forest to him. He complained of the fate that awaited him. “Listen well and don’t be sad! I’ll help you out of your trouble. I’ve thought of something! Tomorrow, I’ll come out of the wood and carry off your master’s child. I’ll let the baby fall and you will take him back to his parents who will think that you saved him. They will never let you lack for anything again,” said the wolf.

The plan pleased the dog and it was carried out just as it was arranged. The father screamed when he saw the wolf running across the field with his child. When Old Sultan brought him back, then he was full of joy and stroked him and said, “Not a hair of yours shall be hurt, you shall eat my bread free as long as you live.” And to his wife, he said, “Go home at once and make Old Sultan some soggy bread that he will not have to bite and bring the pillow out of my bed, I’ll give it to him to lie upon!”

And from that time on, Old Sultan was as well off as he could wish to be. Soon afterward, the wolf visited him and was pleased that everything had succeeded so well. “But listen well, you’ll just wink an eye when I carry off one of your master’s fat sheep,” said wolf. “Don’t reckon upon that! I’ll remain true to my master!” answered the dog. Also, read Bluebeard.

The wolf who thought that this couldn’t be spoken in earnest came creeping about in the night and was going to take away the sheep. But faithful Old Sultan barked and the farmer chased after the wolf with a big stick. The wolf had to pack off but he cried out to the dog, “Wait, you scoundrel! You shall pay for this!”

The next morning, the wolf send the wild boar to challenge the dog to come out into the forest so that they might settle the affair. Old Sultan couldn’t find anyone to stand by him but a cat with only three legs and as they went out together, the poor cat limped along and at the same time stretched out her tail into the air with pain.

The wolf and his friend were already on the spot appointed. When they saw their enemy coming, they thought he was bringing a sabre with him. When the poor beast hopped on its three legs, they could only think every time that it was picking up a stone to throw at them. They were so afraid that the wild boar crept into the underwood and the wolf jumped into the tree. You may also like to read, King Thrushbeard.

The dog and the cat, when they came up thought that there was no one to be seen. The wild boar, however, had not been able to hide himself altogether and one of his ears was still to be seen. Whilst the cat was looking carefully about, the boar moved his ear. The cat thought it was a mouse. And so jumped upon it and bit it hard. The boar made a fearful noise and ran away.

The dog and cat looked up and saw the wolf who was ashamed of having proved himself to be so afraid. When he came down, he made friends with the dog.

Here is a visual depiction of, “Old Sultan Story”. See the video story below,