This is one of the great brother Grimm fairy tales. An old woman has three daughters. They live in the forest. The eldest one has one eye in the middle of her forehead, the second has two eyes and the third one has three eyes, two in the sides and one in the middle of the forehead. She named their children with the number of eyes they have.

Since Two-Eyes is just like the other people, her mother and both sisters treated her badly. They are not nice to Two-Eyes. “Clean the house!” says Three-Eyes. “Look after the goat!” says One-Eye. “You are a bad sister. You cannot eat today,” they say. Also, read Toads And Diamonds. 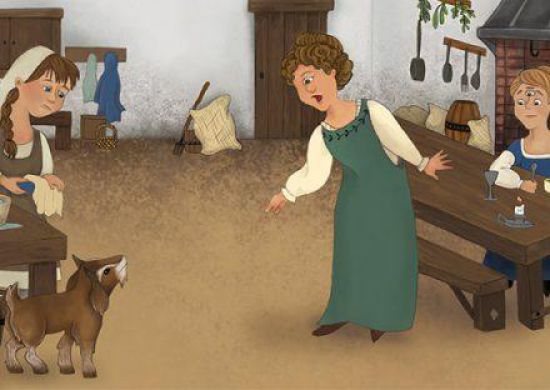 Image Source–> 1fairytale.com. Two-Eyes is very sad because of her sisters. She is hungry. An old woman meets her in the forest and speaks to her. “Sing this song and you can eat,” she says. “Bleat, goat, bleat! Bring me lots to eat!” Two-Eyes sings the song and the table appears with lots of food. Two-Eyes eats all the food.

As Two-Eyes reaches home, she does not eat dinner. “I’m not hungry,” she says and goes to bed. Her sisters are surprised. “Why does not she eat?” asks Three-Eyes. “Something is strange! Tomorrow, I’ll watch her,” says One-Eye.

The next day, One-Eye goes with Two-Eyes. Two-Eyes’s sister is with her, so she cannot sing her song. Unfortunately, Two-Eyes cannot eat this time.

That night, Two-Eyes goes to the forest. The old woman is there. She tells Two-Eyes, “Sing ‘Is your eye awake? Is it asleep?'” The old woman says, “Sing it two times. Then your sisters will fall asleep!” “Oh, thank you!” says Two-Eyes. You may also like to read, The Three Feathers.

The next day, Two-Eyes sings the song and her sisters goes to sleep. Two-Eyes can now eat lots of food. But her sisters know she is eating, so they take away the goat. In the night, Two-Eyes goes to the old woman. She tells her about the goat and starts to cry. “Do not worry,” says the old woman. “Take this and put it in the garden of your home. You will have a tall tree of gold and silver. Sing ‘Apple on the trees, I am Two-Eyes, come to me!'” She takes it and goes back to home.

The next day, there is a large tree with gold apples in the garden. One-Eye and Three-Eyes are very happy. They try to get the apples, but they cannot. The tree is too high. Two-Eyes sings as the old woman has said and the apple falls for her. The two sisters and her mother is now very jealous of her and snatches the golden apple from her.

One day, a knight comes and watches this. the Knight says he will marry the girl who can get the gold apples. Two-Eyes sings, “Apple on the tree, I am Two-Eyes, Come to me!” An apple falls for Two-Eyes.The Knight marries Two-Eyes and lives happily ever after. Also, read The Riddle.

Here is a visual depiction of one of the great brother grimm fairy tales, “One Eye, Two Eyes, Three Eyes”. See the video story below,