This is Orpheus And Eurydice Story for children. Once upon a time, there lived a great musician in Greece called Orpheus. He could make the most beautiful music ever heard when he played his lyre. Even the birds would come by his window to listen to him play.

Orpheus lived with his wife, Eurydice who loved him very deeply. Orpheus was also madly in love with Eurydice. They really were made for each other. Also, read Zeus And The Potsherds. 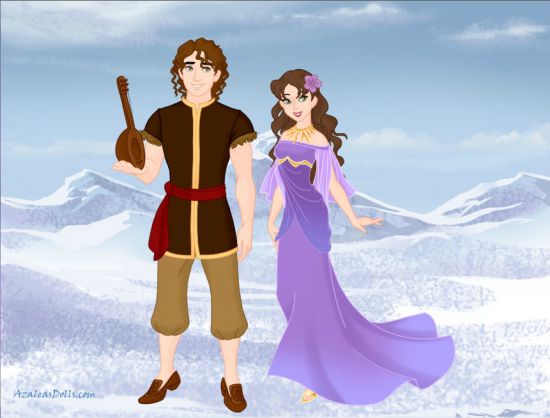 One day though, while Eurydice was picking flowers in the woods, a snake bit her. She died at once. The life of Orpheus changed completely. He was so sad he could no longer play the lyre.

One day, he decided to take an action. “I will go to Hades, the God of the underworld, and get Eurydice back,” he said to his friends. But the underworld had many dangers and no one had ever returned from there. But Orpheus had his mind set and there he went to Hades with his lyre.

Reaching the gate of Hades, Orpheus found a three-headed dog, the fierce Cerberus. Quickly Orpheus started to play his lyre again and Cerberus was magically enchanted allowing Orpheus to sneak in. There, Orpheus met Hades and Persephone, the King and Queen of the Underworld who were surprised to see him. “What are you doing here, mortal?” Hades asked.

While playing his lyre, Orpheus told Hades how much he loved Eurydice. “You, Hades, once fell in love with your wife too,” Orpheus pointed out. “Since everybody dies you’ll get our soul back anyway,” he continued, “so why not let Eurydice live for a few more years?” Hades and Persephone were touched by Orpheus’ words and music and agreed to free Eurydice.

But there was one condition. “As a token of your belief in me, Eurydice must walk behind you as you travel back to the upper world,” Hades said, “and you must not look back at Eurydice until you have exited the Underworld.” Orpheus agreed.

The couple began their ascent. Orpheus felt tentative as he didn’t know whether he could trust Hades. Soon he could see the exit. Orpheus stepped out of the cave and into the light but just as he was out, he turned back to confirm if Eurydice was indeed behind him. You may also like to read, Prometheus And The Two Roads.

Orpheus had disobeyed Hades and the only thing Orpheus heard was a fading “I love you!” as Eurydice was pulled back to the Underworld. He spent his remaining days among birds and trees playing the most beautiful music ever heard.

Some say the spirits of Orpheus and Eurydice ended up finding each other after many years and are still together.

Here is a visual depiction of  “Orpheus And Eurydice Story”. See the video story below,