This is the Pandora’s Box Story. A long time ago, a maiden called Pandora lived. In those days the people used to live in happiness and knew nothing of pain. Pandora should have been the happiest of all because when she had been born all the Gods gave her everything she needed. She had health and a good temper. Pandora had beauty and wits, everything any girl could have wished for.

But Pandora had one thing she was not happy about. It was a wooden box tied with a golden cord. The box was given to her as a present by a king of Gods. She was quite upset with it because she had been told never to open the box. “What good is a box tied with a golden thread if you have been told never to open it?” she thought. Also read, The Little Match Girl Story. 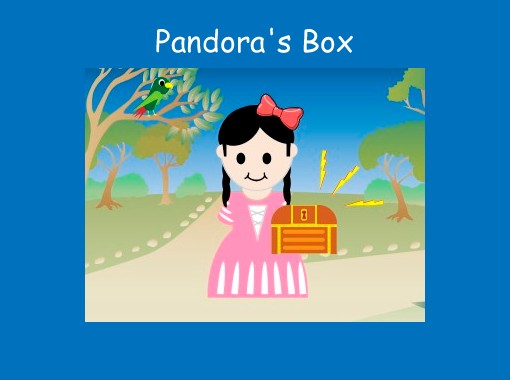 Everyday Pandora sat looking at the wooden box. She wished and wished to know what was inside the box. Then one day she had an idea. She thought it would do no harm if she peeked inside and closed the lid quickly.

Once, Pandora had thought about opening the wooden box, she had heard soft voices coming from the box. Remembering that she was not supposed to open the box, she stopped.

With a cry, she dropped the lid of the box, but it was too late now. Pandora had let loose the troubles into the world. The ugly creatures flew out of the window and into the human world. They carried sorrow, pain, and suffering everywhere. Pandora was very frightened. She did not know what to do. While she thought, she heard a sweet voice call out from the box.

“Pandora let me out. I am hope, and I will help you,” it said to her.Pandora did not know who or what hope was. She was scared that it might be like the other creatures had come out. But hope’s voice had sounded very kind. Pandora opened the lid once more. When Hope came out, it was nothing like the creatures Pandora had let loose. Hope had beautiful wings, which shone like sunshine. It made Pandora better just by seeing her.

Hope could not bring the ugly creatures back into Pandora’s box. For the creatures flew all through the world, spreading pain and sorrow to the world that had never known pain.But wherever the ugly creatures went, Hope went after them. She brought comfort to all that were sick and in pain. Hope is still the world today, going around spreading joy and comfort.

Here is a visual depiction of, “Pandora’s Box Story”. See the video story below,